From now on, six tonnes less trash lies beneath the leaves in the flood-basin of Bodrog river, between Sárospatak and Tokaj. The organizers of Plastic Cup used their previous years’ experiences and knowledge for the first time on one of the tributaries of Tisza river. Thankfully for the local supporters, also the commitment of attending teams and volunteers, almost 300 bags of trash were collected in four days. Besides the usual enthusiasm which has been present in the past riverine races, the outstanding contribution of attendees, organizers, teams and volunteers led to a new record at the I. Bodrog Plastic Cup.

Plastic Cup set up the inaugural Tisza-lake Cup last year, which was the first riverine cleanup event, what was held away from Tisza river. In the past eight years, due to the regular competitions on Tisza, and other activities throughout the year, about 90 tonnes of polluting materials has been collected, and in the meantime, on some parts of the riverbank, the nature has fully recovered. More and more know-how and experience has been gathered in waste collecting and processing.

With the first Bodrog Plastic Cup, we wanted to share all the experiences we got from the previous years and strongly involve the local residents into the organization and implementation, at a really important tributary, the Bodrog river. The outcome speaks to itself, encouraging us to expand this experience to the whole length of Tisza river, even beyond the borders 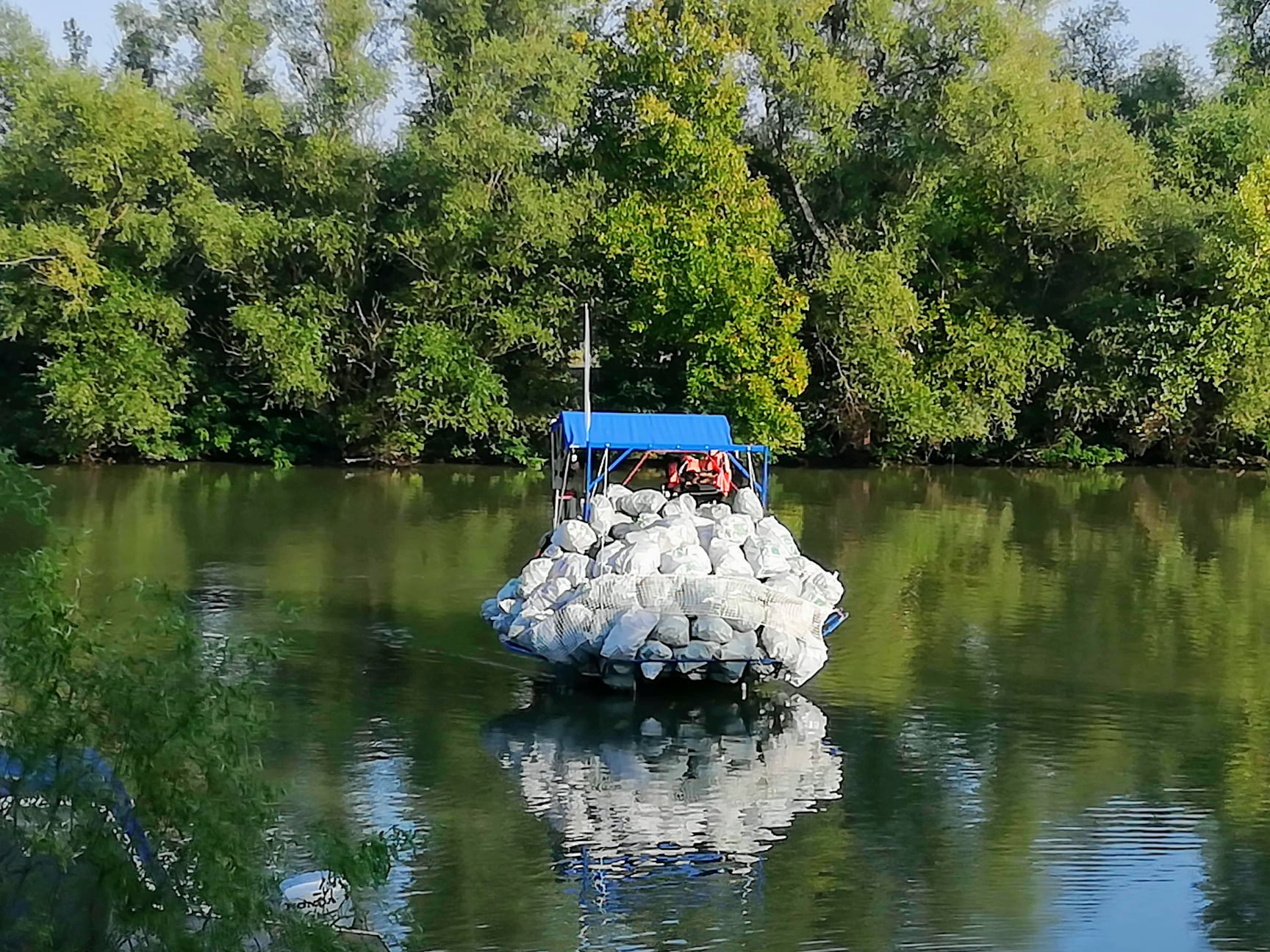 For the World Water Day, Filmjungle.eu Society organized a several days long trash picking program last year at Bodrog. At Sárospatak, the full support and heartwarming welcome were given to the attendees by a few hundred loud children, and the local government. That was the time, when #HappyBodrog program and the planning of the 2020 race was being launched. In the past few days, within the #HappyBodrog program, professionals set the competition based on previous experience, working together with local partners and distributors. Commitment of local residents helped a lot to succeed: ZÖLD Kör from Hajdúböszörmény became a co-host of the event, local government of Olaszliszka participated the Plastic Cup as a team with boat, local government of Sárospatak helped with canoe trash picking, and Aggtelek National Park assisted with floodplain trash picking. Many mayors have visited the Plastic boat competition, secured by water police and ambulance services. Mr. Máriusz Révész, the Government Commisioner of Active Hungary, patron of the event also joined the competition with his sons and colleagues.

The corporate team of Budapest Bank, called ÖKOsaBB, who has competed last year on Tisza-lake too, won the Bodrog Plastic Cup. Team PETúnia reached the 2nd place, full of veteran pirates. They also won the Hero of Bodrog Award as well. They are the first and only team who won this price both on Upper-Tisza and Tisza-lake too, what means they collected the biggest amount of trash per person.

Achieving #HappyBodrog and I. Bodrog Plastic Cup, the professionals of Plastic Cup put through a program, strongly based on local capacity for the first time. The committed community (this time from Bodrog) ensured to fill the program with content, helping with organization, involving local students, civilians and entrepreneurs. Locals not just only helped in organization and collecting trash, but showed the unique touristic and cultural attractions of the area to fellow plastic pirates. Mayor of Sárospatak gave a culture-historical presentation, as you may find Rákóczi-castle, one of the most famous Renaissance ruins’ memorial here, also one of the most beautiful library in the reformed secondary school. Pirates visited the Arpad-era, Roman Catholic temple in Bodrogolaszi, and at Olaszliszka, from the tower of Saint Mary Temple, pirates could see Bodrog, Zemplén Mountains and Bodrogzug Landscape Park.

As a tributary of the Tisza, Bodrog has fantastic environmental, cultural and culinary attributes, but during the competition, it became obvious that from two smaller rivers, Latorca and Ung, vast amounts of trash is coming from Ukraine. By Plastic Cup calculations, a new record has been set, the record for collected trash per participants. Few areas have been completely cleaned, but plastic pirates could not make to reach all the areas. 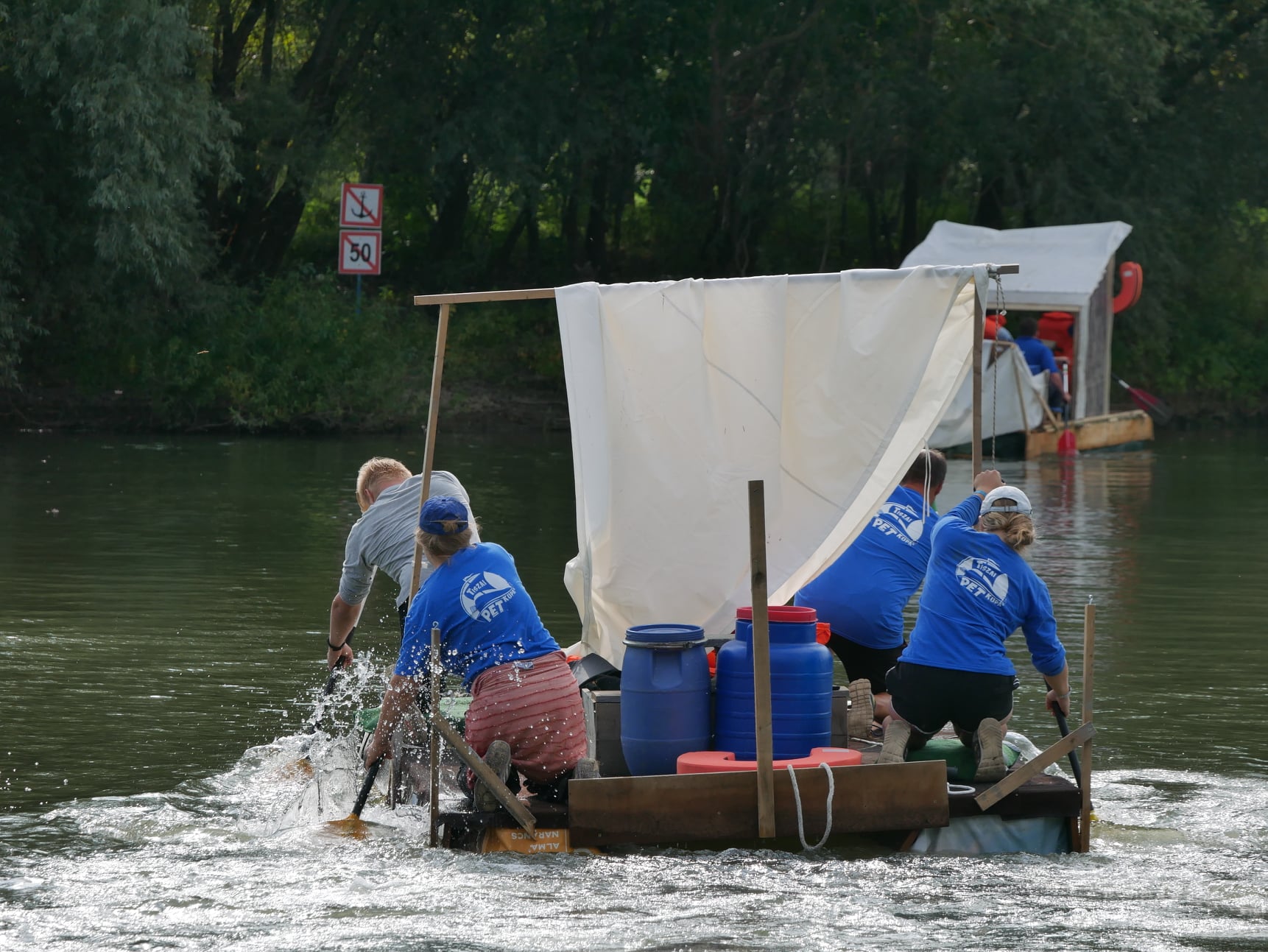 Huge recognition for the podium and attending teams:

Half of the trash will be recycled

The professional partner of the event, the Hungarian Association of Environmental Enterprises coordinates to keep the collected trash in the loop. The essential volunteer team of Plastic Cup sorted everything, bag-to-bag, and separated the waste by different types. Big amount of glass have been collected on Bodrog, which will be transferred by Zemplén Z.H.K. Nonprofit Kft. and goes to processing companies and will be recycled. PET bottles were sorted by colour, baled and will be processed by Huke Ltd, based in Sárvár. Polyethylene and polypropylene packages, like shampoo bottles are recycled by Holofon Zrt. The second-hand material will be used later for ship hulls and boards. Half of the collected trash will be reused, just like after Tisza events.

Without their help, the 1st Bodrog Plastic Cup would not have been possible

The event was held with the assistance of the main sponsor, Ministry of Innovation and Technology, János Áder as chief patron and Máriusz Révész, Government Commissioner as a patron. Thanks to KONASOFT, developing Clean Tisza app, visitors could check the results live.

Organizers cannot be grateful enough for the professionals of Upper-Tisza Region Diver and Lifeguard Club, who ensured the safety of all the participants on water. The Plastic fleet received huge support from Bodrog-region local governments. Olaszliszka, Sárospatak and Bodrogkisfalud assisted in catering for the teams, mayor of Kisfalud cooked his own food for the participants.

PETII rapid reaction ship and LOGIKA assisting ship were running with the engines of Honda and DECK.hu. Special thanks to North-Hungarian Water Management’s cooperation.

Henkel and Messer Hungarogáz has been helping in cleaning rivers for years, and DHL Global Cargo Company assisted as logistics partner. Bigbags were provided by Green Shipping Solutions and Bölkei István, agricultural entrepreneur from Olaszliszka. DECK.hu offered shipping equipment to clean Bodrog and Tisza. Hegyalja TV and Europe Radio presented day-by-day interviews to spread the news of the programme.

Cleaning activity continues in fall, mainly on land, in basins’ forests with the so called Smiling Bags. Organizers distributed bags in towns and cities all along on Tisza, to involve citizens, getting rid of the trash. Smiling bags are available for everyone in three colors, and these are completely free of charge in the cities from Tiszadada to Tiszabábolna. Plastic and cans go to the yellow, glass to green and common waste to black bags, but only those, what can be found in the flood-basin. Pickup and drop-off points of bags can be found on the website of Plastic Cup.

I. Bodrog Plastic Cup was completed by the support of Ministry of Innovation and Technology.