Plastic Pirates removed daily one tonnes of plastic
from Tisza-lake

In three days, the participants of the 1st Plastic Cup of Tisza-lake collected nearly three tonnes of waste. As the organizers and participants emphasized, this is just the tip of the iceberg, as the floods of the past weeks have spread much more waste into the river's floodplain. The plastic boat fleet was cleaning the river from Tiszafüred to Kisköre, while the canoes cleaned the lake through the channels. The many mosquitoes, the heat and the storms cannot cease the appetite of the plastic pirates. The action ended successfully last week after the last plastic bottles were baled. Special areas with protected aquatic and terrestrial wildlife have been cleaned up, and thanks to live reports and videos, more people have learned about this environmental problem and how to tackle it. 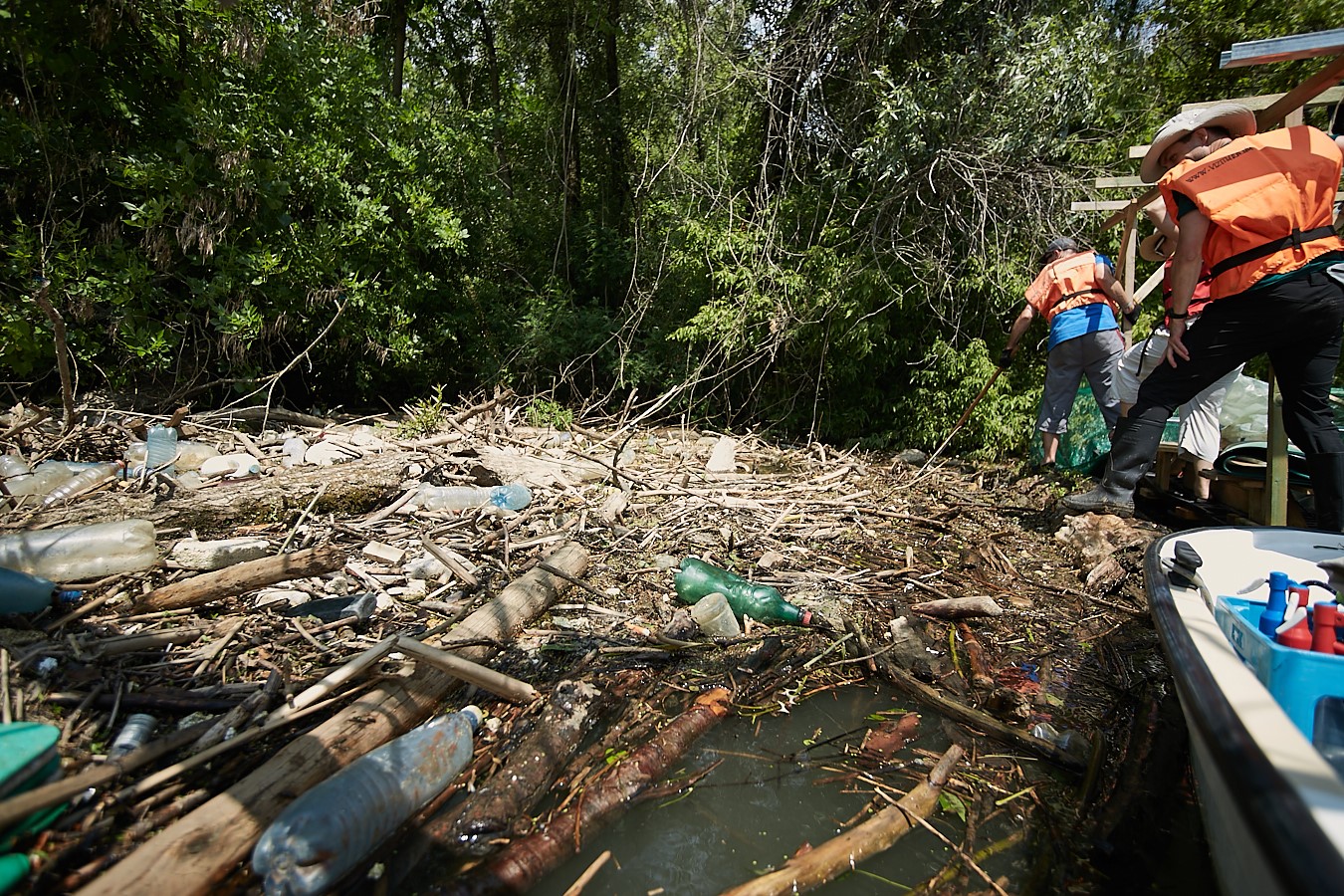 Approximately 80% of the nearly three tonnes of collected waste is plastic bottle floating on the water with lightness, most of which is brought by the river from beyond the border. Among the other wastes, the participants also found a refrigerator, TV sets, insulators and hazardous waste (paint, insecticide, oil bottles). The organizers of the competition, the experts of Filmjungle.eu Society have already organized six competitions in the Upper Tisza in recent years, but the waste situation at Tisza-lake after the current floods shocked them. Canoeing on the 25-kilometer-long run, there were floating driftwoods mixed with plastic bottles at every 100-150 meters, held by fallen trees off the coast. The situation was not better in the floodplain forests and in the reeds, near everywhere one can find continuous waste islands. Thanks to the work of the water specialists, most of the waste is concentrated on the shores of the living Tisza, as during floods, the local water authority (KÖTIVIZIG) carefully closes the rinsing channels to protect the clean and good quality water of the lake from eventual pollution brought by the flood. 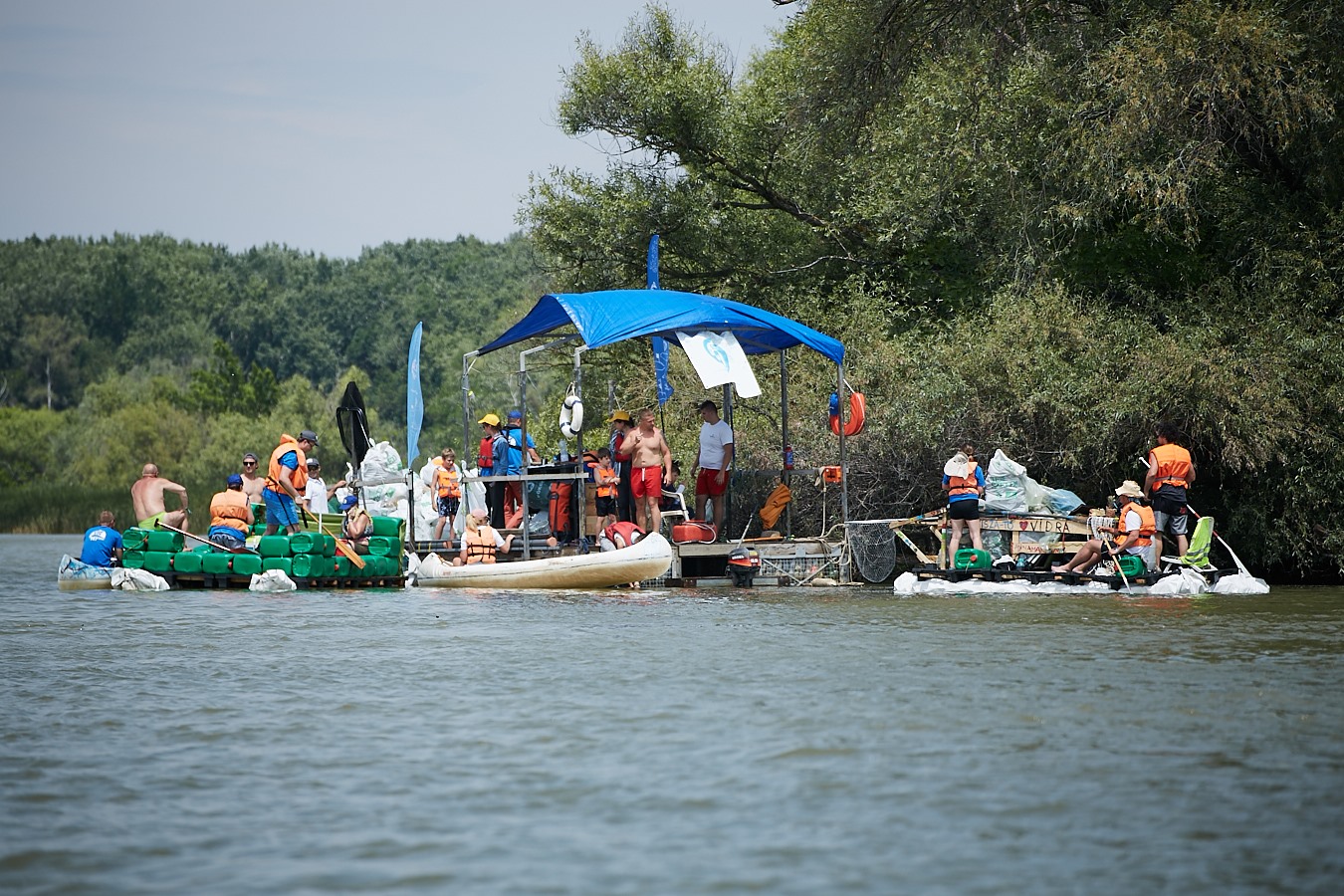 The Plastic Pirates collected the bottles without stopping on all the three days spent on water, and the full bags were collected on the board of the M.V. PETényi mothership built from community crowdfunding and floating due to plastic bottles, and it transported the bags to the ports. By the end of each day, a total of 250-300 bags of waste were collected sorted and compressed by teams and volunteers. More than half of the collected quantity, thanks to the partner NHSZ Tisza Nonprofit Ltd. and the Association of Environmental Enterprises, is returned to the waste cycle and gets recycled. 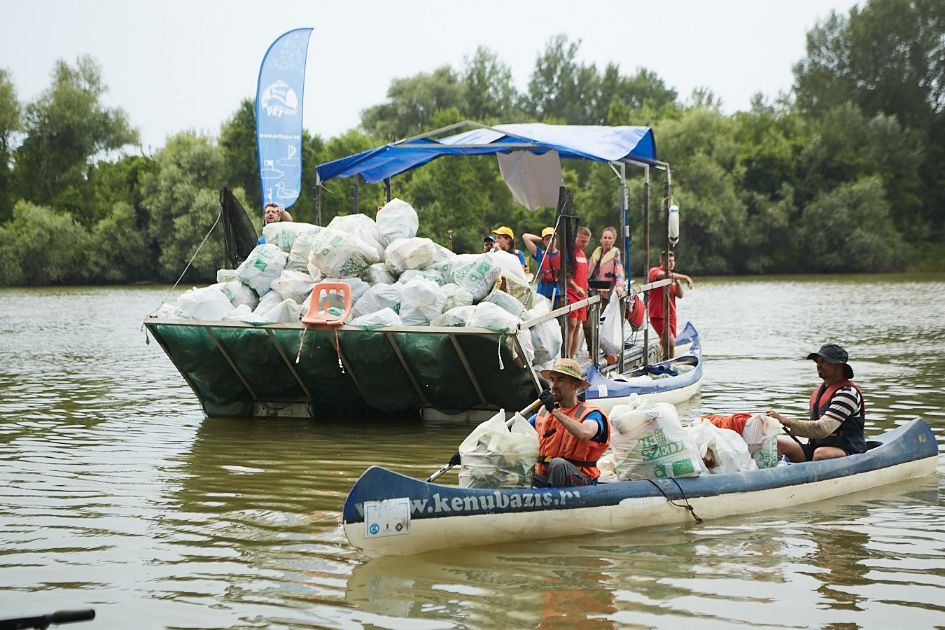 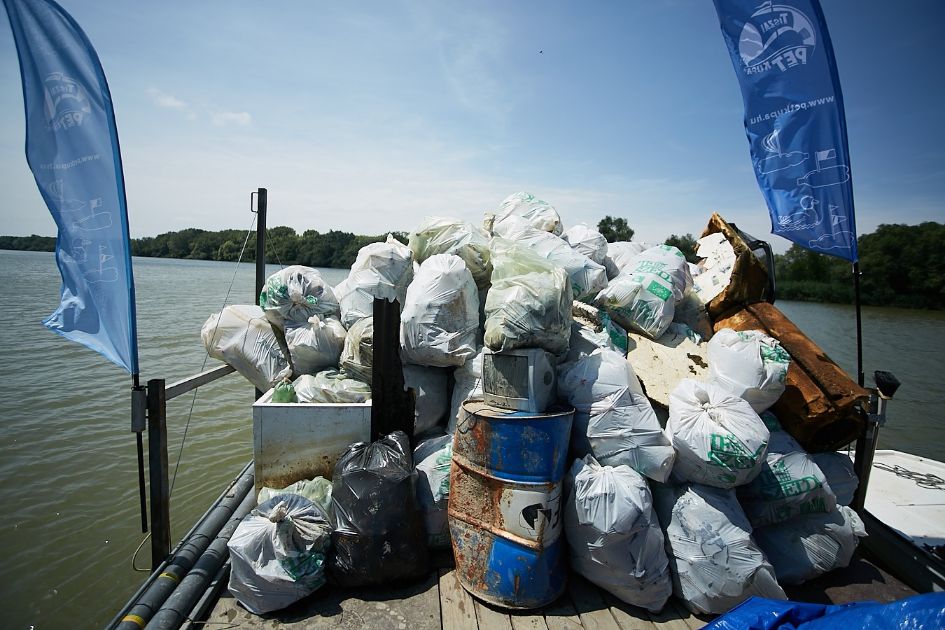 The winner of the first Plastic Cup of Tisza-lake was the team of KÖTIVIZIG, gathering over 300 bags of garbage with extraordinary efforts.

For us, this Tisza-lake event was very important, and practically all of our employees were represented from the director to the dike-reeve. I am very proud of my team, but the point here is not who will be the first, but to collect as much garbage as possible. I would like to thank the other teams, volunteers and organizers for helping us make the Tisza-lake clearer and more beautiful 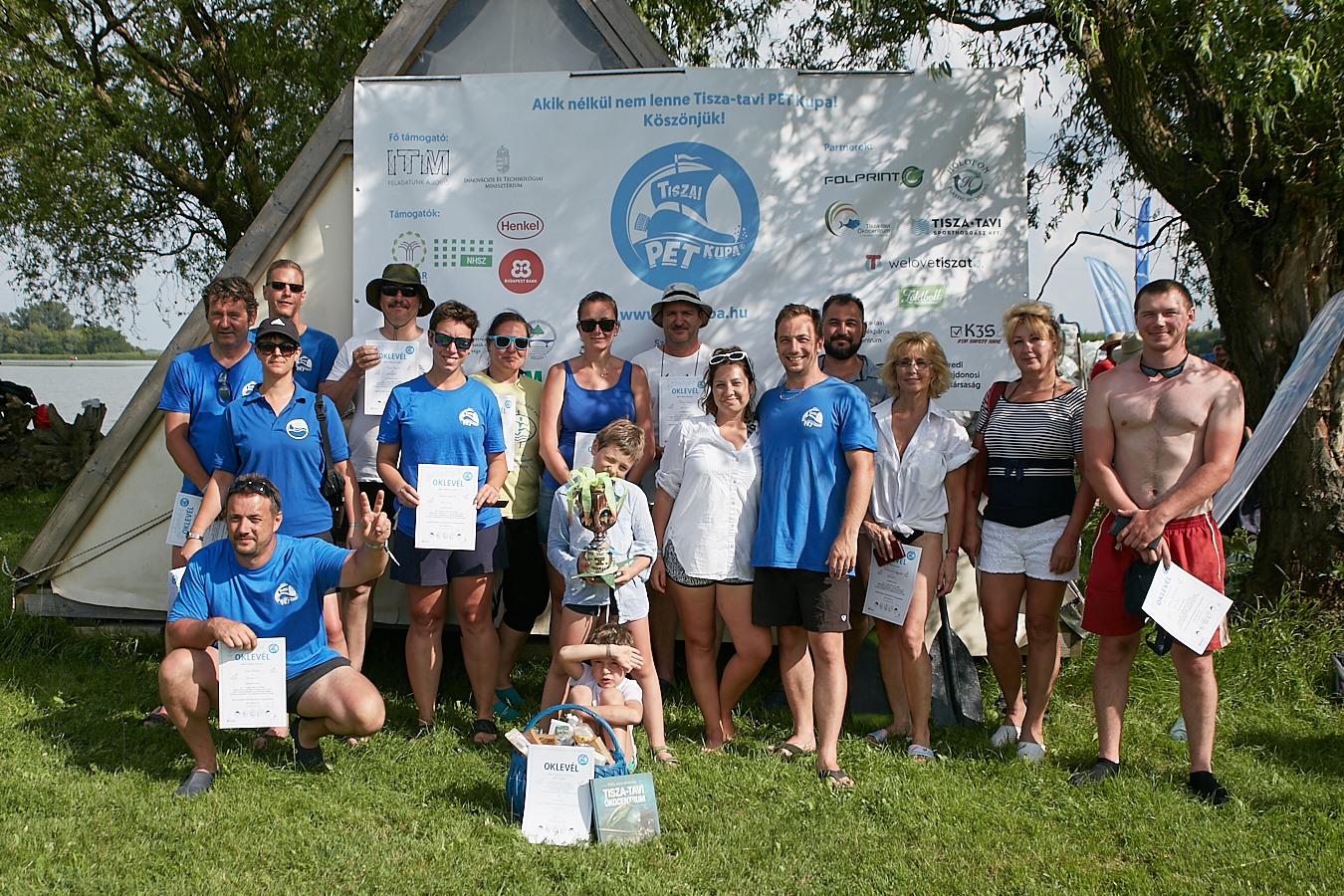 The organizers emphasized that all boats of the fleet competed fairly, helped the other team in a difficult situation and, most importantly, the next generation was on board of several ships. The children were primarily serving on the plastic boats, and they were judging the already traditional PETastar (such as Megastar) talent competition for plastic pirates.

The Hero of Tisza Award, created in 2018, was given to the crew of the PETúnia vessel, where the team of four children and four adults collected the most waste per person.

The purpose of the Plastic Cup competitions and actions is to highlight the problem of regular pollutions of the Tisza and to show how much success can be achieved through collaboration. This was the first time for Plastic Pirates to sail on Tisza-lake, yet they were known and got a lot of help from all directions. The organizers thank the specialists of the Tisza Water Police Department and the Diving and Rescue Association of the Upper Tisza Region that they helped the cleaning of the Tisza also during difficult shipping conditions. The Plastic boat fleet received a lot of help in Poroszló, Tiszafüred, Tiszanána and Kisköre. At the invitation of the Central Tisza Region Directorate of Water Management and Filmjungle.eu Society, almost all the organizations around the lake moved and helped the action with transportation, equipment, food, and at the Tisza Lake Ecocentre, a temporary exhibition focused on the plastic floods of the Tisza.

The fight against plastic pollution has not ended; the elimination of the accumulated waste at the Kisköre hydroelectric dam has begun these days. The work is carried out by KÖTIVIZIG specialists with barges. The Plastic Cup made a short film about the problem. Plastic Pirates are also involved in this action and we are looking for volunteers to sort the waste. The traditional one-week boat race will also take place. The 7th Upper-Tisza Plastic Cup will run between 3-11 of August, from Tivadar to Záhony, and Filmjungle.eu Society will also organize regular waste collection actions for which volunteers are sought to join. 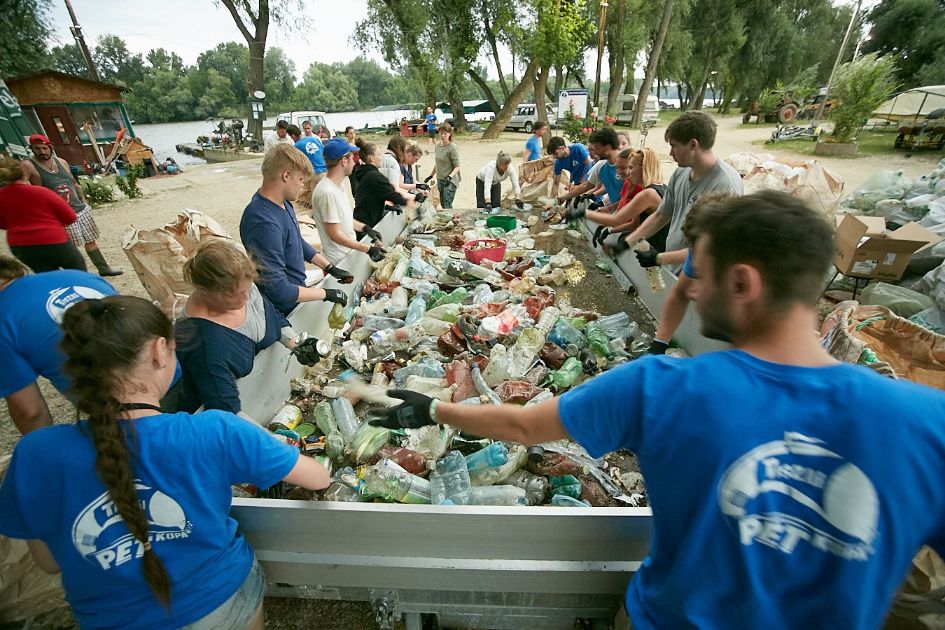 Big respect goes also to the teams finished in the second part of the field: