Waste monitoring on the Transcarpathian part of Tisza

Numerous areas polluted by litter as result of human inattention perturb the beauty of natural habitats and watercourses of Transcarpathia. In order to eliminate these landfills, we need to know their location and size. It is particularly important on the still unregulated section of the Tisza, between Tiszaújlak and Huszt. The survey promotes the scientific foundation of the PLASTIC Cup and Clean Transcarpathia project, which will allow us to estimate the quantity and composition of illegal dumps.

In the fall of 2018, the film crew of the PLASTIC Cup and its Transcarpathian partner organizations did a series of recce in the floodplain of the Tisza to map, document and record the waste situation. During the recces, they used the TrashOut application to record the coordinates of locations with dumps on the shore of the Tisza and its floodplain. Those sites were also photographed, while the quantity and composition of the waste were registered. 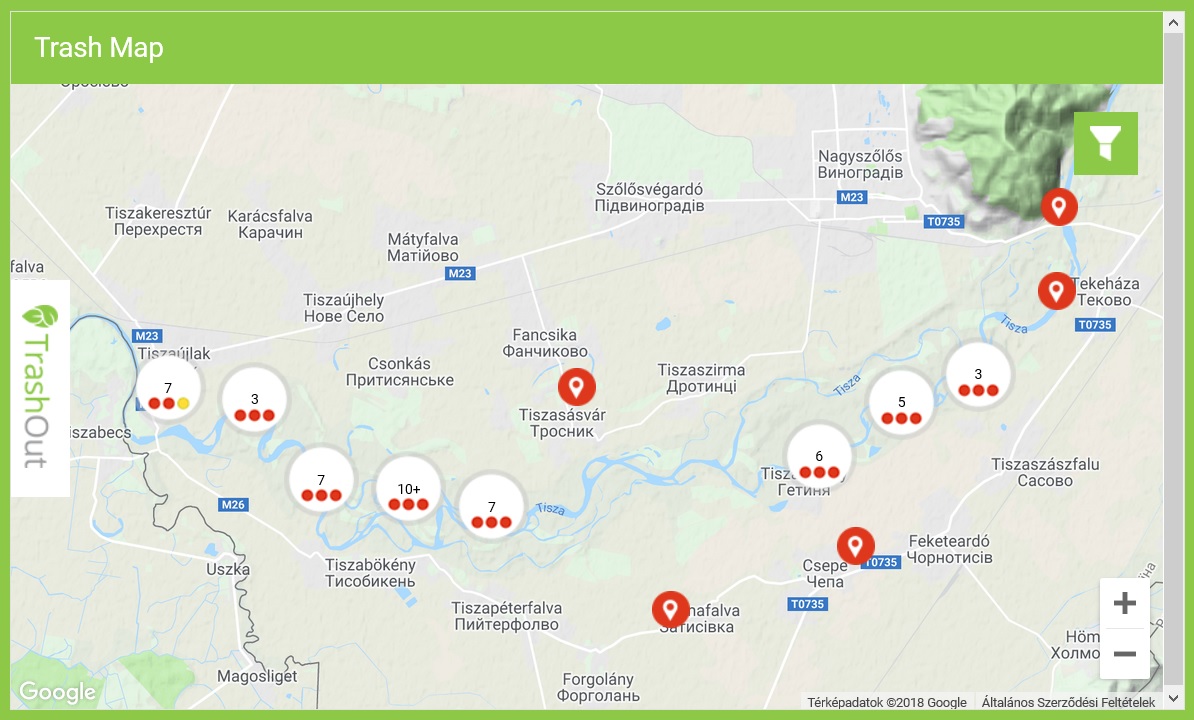 At Tiszaújlak, basically we did not even have to take a step to find large amount of litter, because already below the Tisza Bridge the amount of waste is critical. Going further along the river, the next few hundred meters contained an amazing amount of trash, in the form of PET bottles, glasses and other household waste, in short, everything can be found in the dumps here. Those were brought here by humans and the water. The documented facts from all the surveyed area during the project prove that there are more dumps near the Tisza in the proximity of settlements.

The floodplain forests are covered by illegal dumps or litter brought by the river, mainly PET bottles and plastic waste. In addition to the critical sections, we could see smaller or little amount of garbage brought by the water, and view without a single bottle was scarce. 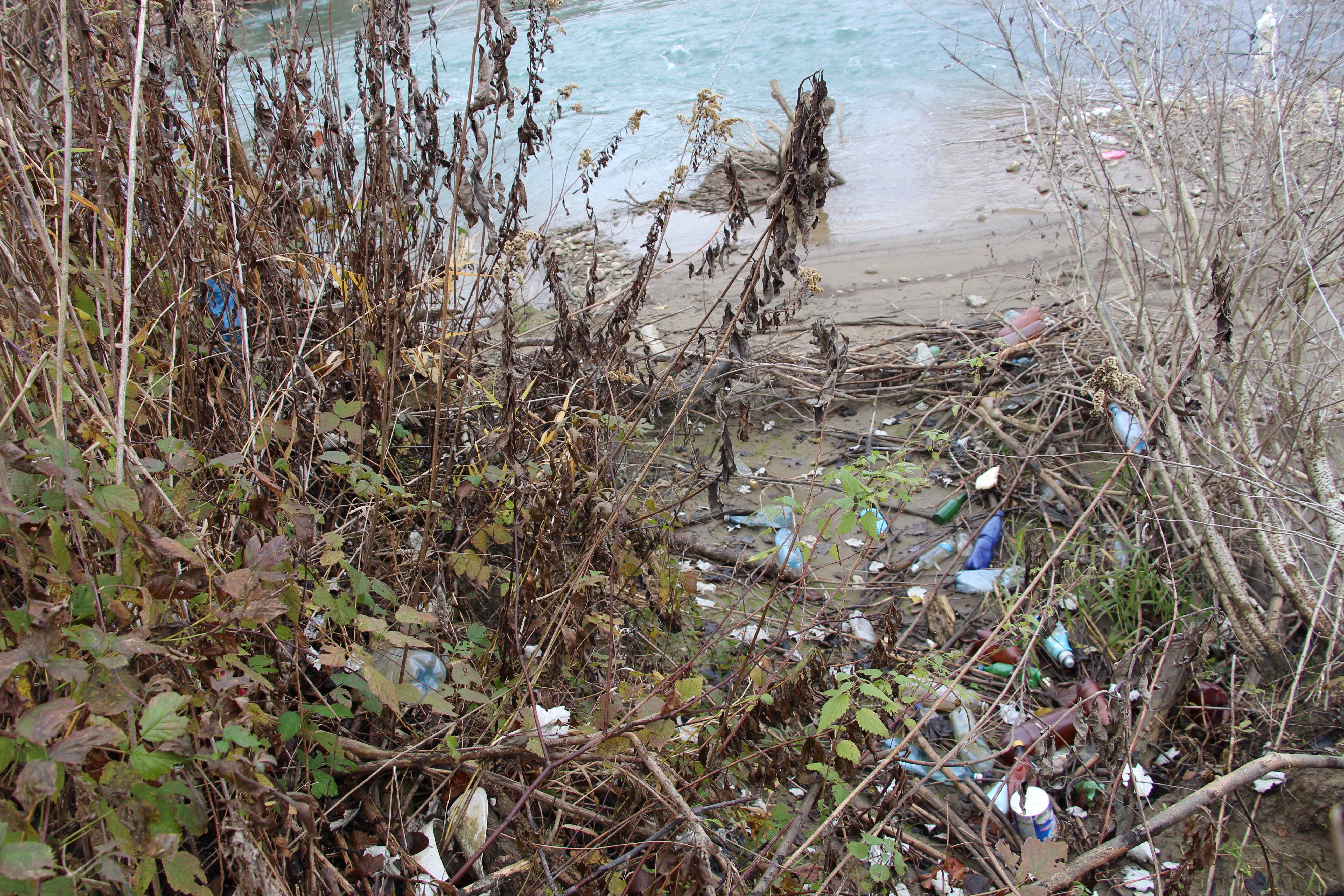 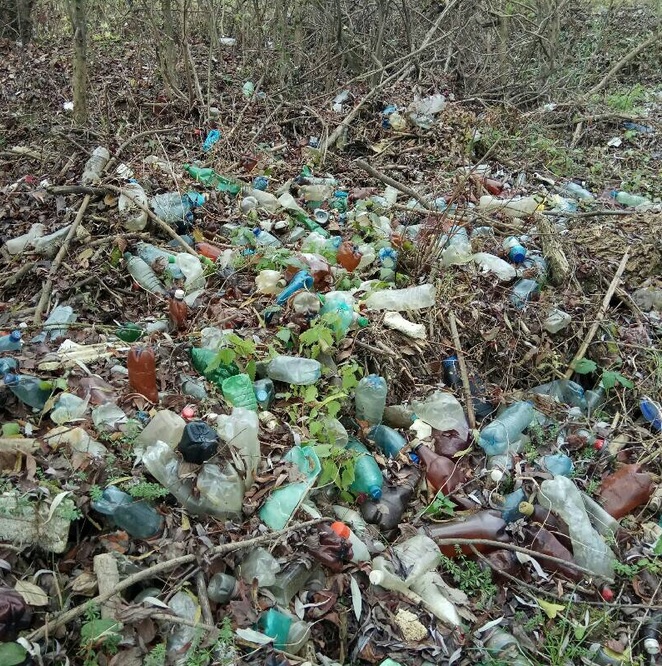 Unlike the Hungarian section, this is a wild, unspoilt part of the river flowing in multiple branches at some places, forming backwaters and islands. The small islands in the Tisza hide a lot of rubbish. The monitoring team managed to get on such an island. The critical phase started already downstream the island, initially only in smaller spots of litter, however, upstream the island till close to Tiszasásvár, the floodplain forest contains contiguous PET hills. From Tiszaújlak to Nagyszőlős, this is the most critical part. 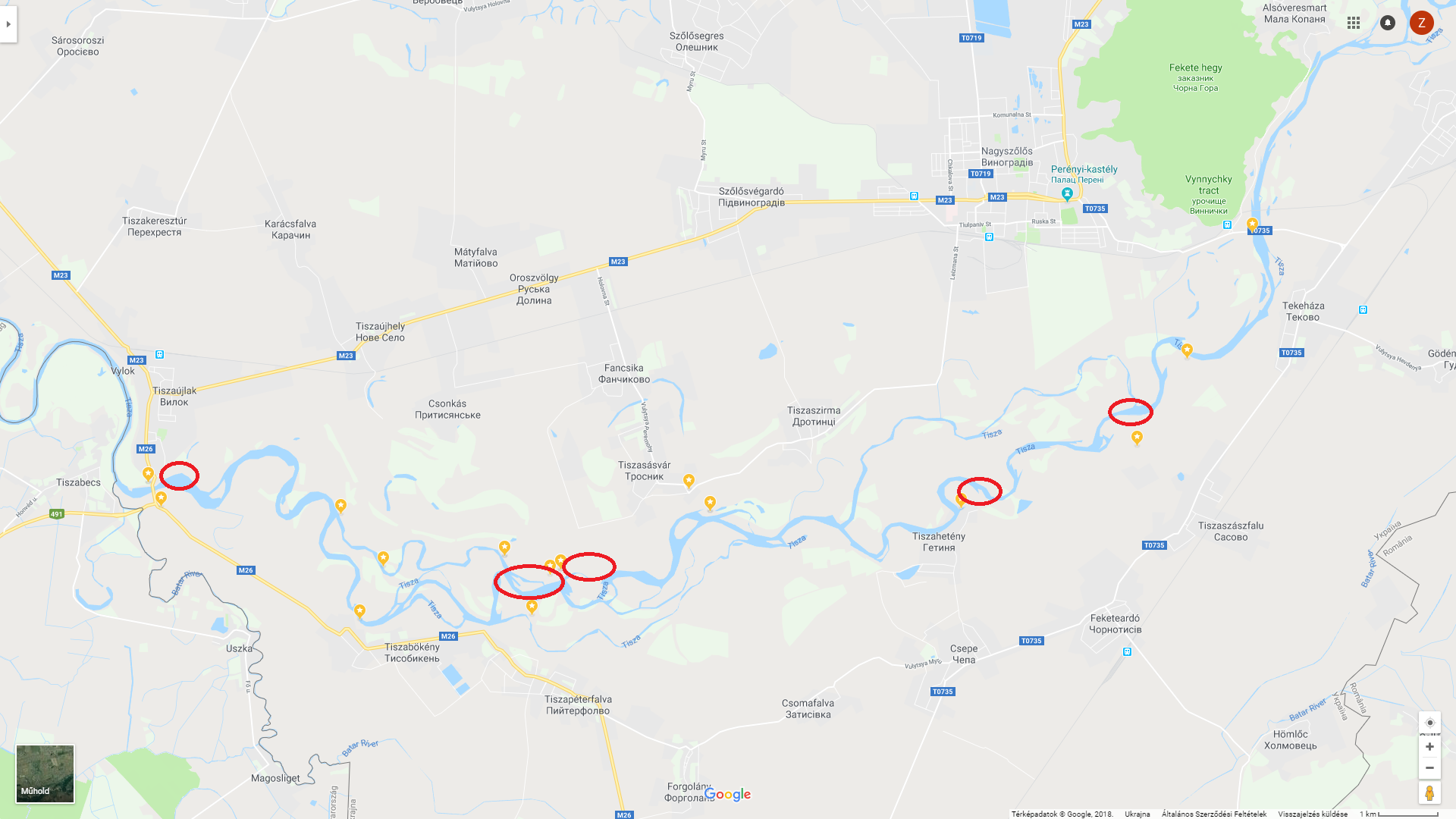 Most critical parts on Google maps

There are several dumps of construction/demolition wastes near Tiszabökény, Tiszapéterfalva and Tiszahetény but in total there are fewer seriously polluted parts. This part is more visited and accessible by people, jpopular by hunters, fishermen and hikers, and therefore there are more litter thrown away or left there by visitors. 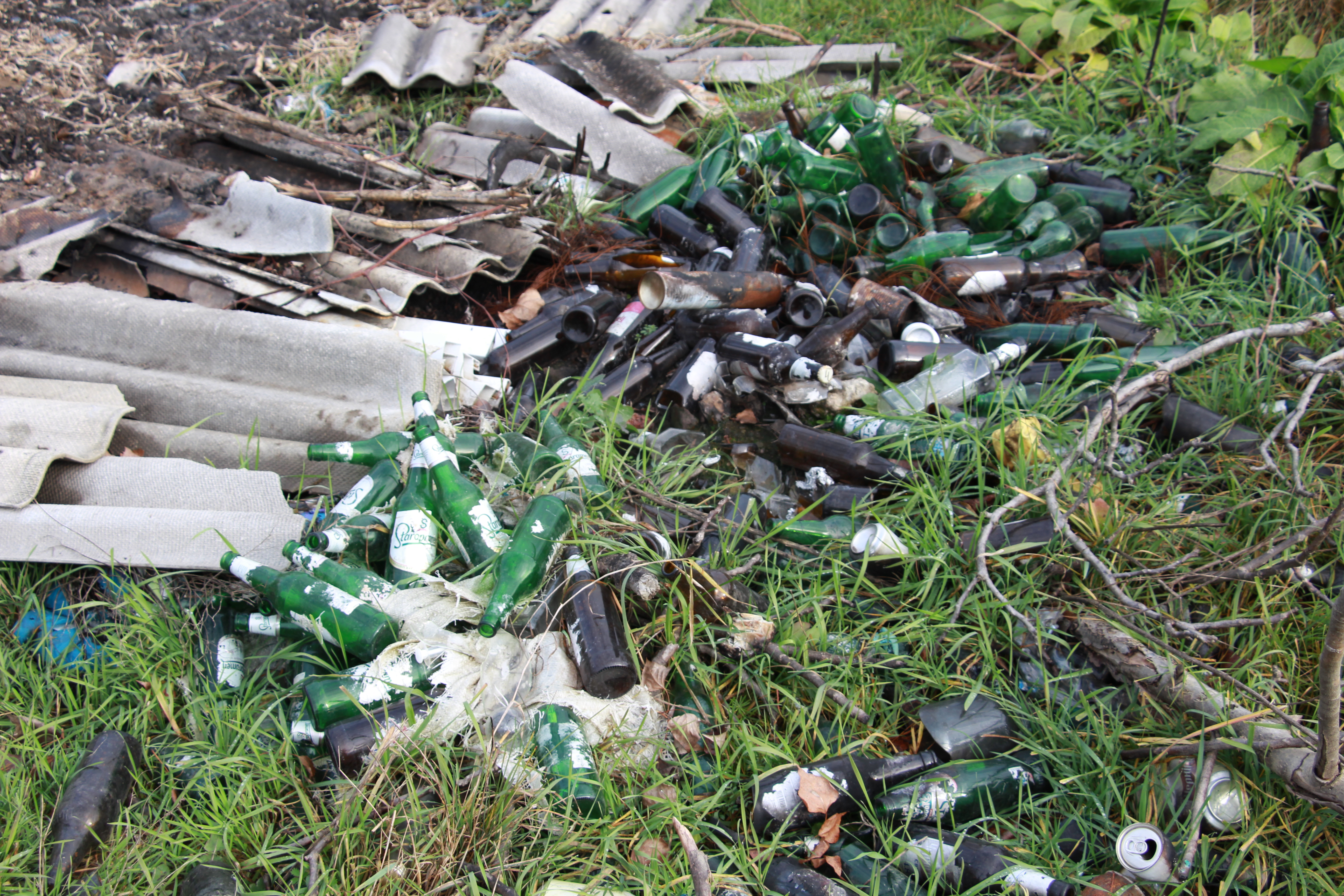 Approaching Telekháza from Szőlős, the shore of the Tisza is a popular camping site and fishing place, where smaller quantities of PET bottles and household waste can be found in a scattered manner.

Leaving the Beregszász hills, the peaks of the Nagyszőlősi ridge elevates. This is a beautiful countryside, no words can describe the beauty of the landscape. Only the dumps around settlements can ruin this sight. 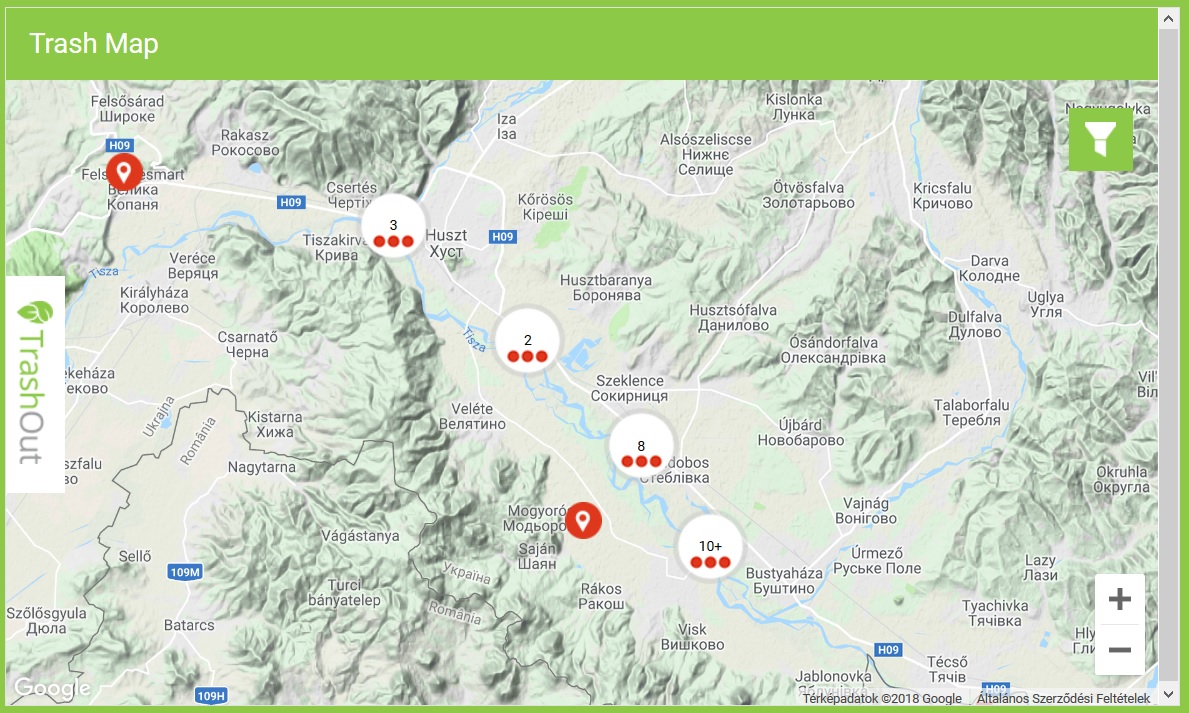 After leaving Visk, we stopped first after the bridge. As we get out of the car, we immediately bump into litter. At the edge of the road there are thrown away municipal waste, glasses and PET bottles. Farer from the road there are tires There are more dumps opposite the road. On the shore of the Tisza at Visk there are a lot of litter, both under the bridge and in the floodplain. 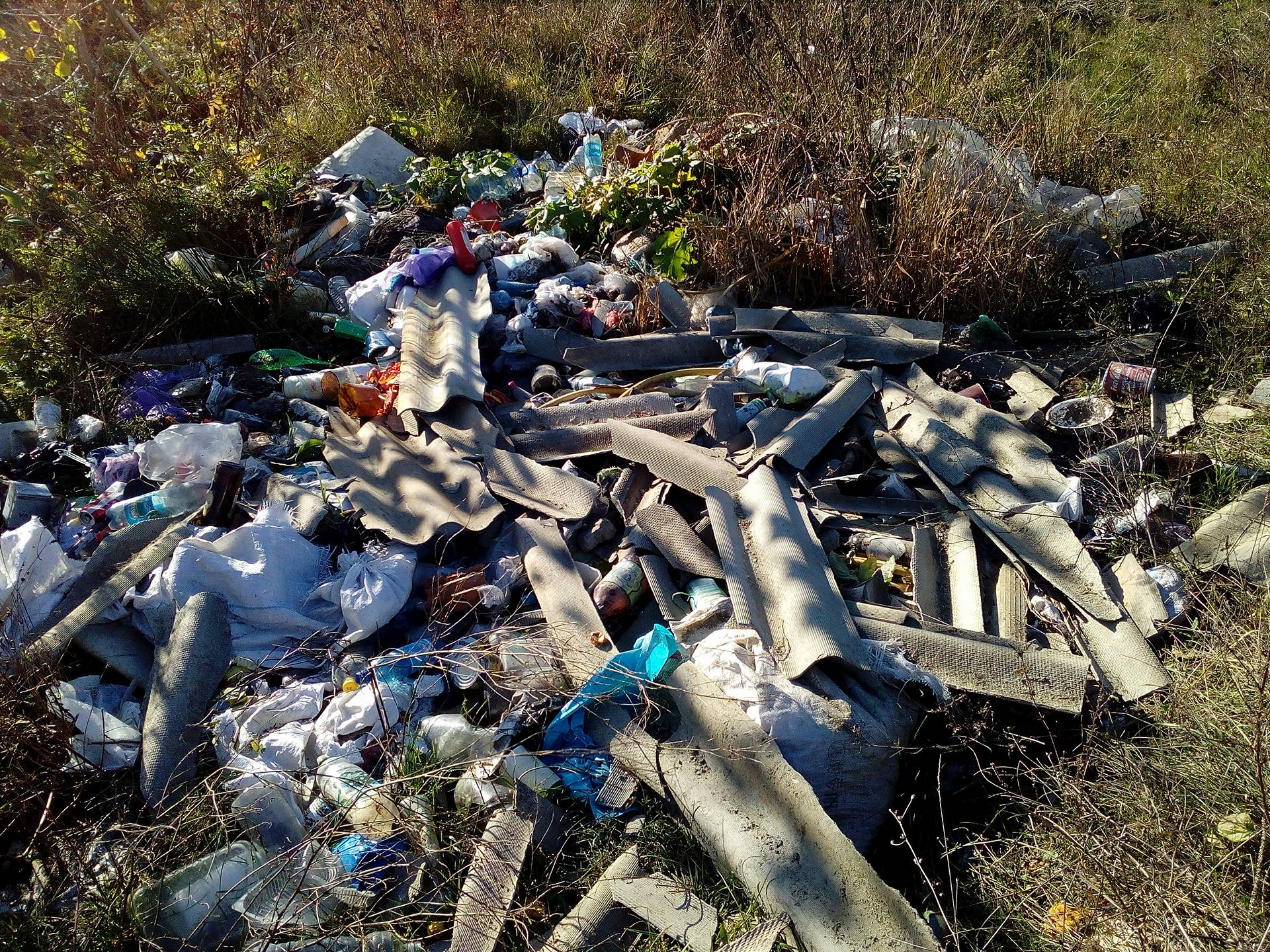 At the border of the village Száldobos (Стеблівка), the team found a bigger dump at a dirt road. Based on the composition, villagers are likely to carry garbage here: construction and municipal waste, and electronics. At the next settlement, Szeklence (Сокирниця), the situation is similar. In the floodplain between Szeklence and Huszt, we do not find dumps directly deposited here by humans, but PET bottles from upstream settlements brought by water are everywhere. The team marked a total of 30 Trash Out locations on the way to Huszt.

On the approximately 60 km coastline of the area between Tiszaújlak-Nagyszőlős and Visk-Huszt, 60 TrashOut dumps were registered, out of which 17 sites with a scale that waste could only be transported by car.

Waste monitoring in Hungary and beyond

Organizers and volunteers of PLASTIC Cup have been performing waste monitoring work already for 3 years with a mobile application (Trash Out) that makes contaminated sites and quantities transparent and manageable. So far, more than 160 polluted sites have been registered at the Upper Tisza in Hungary, of which 21 have been cleaned thanks to the many supporters. The experience of the Hungarian monitoring activities (4 times on a total of 240 river kms) is that the problem is more complex and more serious than it was known before. Part of the waste landfilled quickly crumbles and falls apart, such as polyurethane foams and polystyrene, while oil sprays and insect repellents mean risk on short term. Most of the dumps are not even visible, but at present there is no information about the heavier materials that are sunk into the sludge.

According to experience of recces in Ukraine and scientific works, the most significant difference between the composition of Hungarian and Ukrainian dumps is that the whole spectrum of household and industrial wastes (including hazardous wastes) can be found on the Ukrainian part, these materials are no longer visible on the Hungarian section.

More about the situation of the Ukrainian waste management

Experiences of the III. Professional Roundtable and Ideation for a Cleaner Tisza

The PLASTIC Cup – under the auspices of the Hungarian Association of Environmental Enterprises held a professional discussion with involving both Hungarian and Ukrainian experts in Visk, Transcarpathia in October of 2018. During this, numerous experiences revealed about the situation of the Ukrainian waste management. The summary of the experiences at the Professional Roundtable (in Hungarian): https://petkupa.hu/hu_HU/ujabb-szakmai-lepesek-a-tisztabb-tiszaert
More detailed report (in Hungarian): https://petkupa.hu/hu_HU/dokumentumok/III-KEREKASZTAL-ES-OTLETBORZE-A-TISZTA-TISZAERT.pdf