ANOTHER 6 TONNES OF WASTE REMOVED FROM UPPER TISZA

The IX. Upper-Tisza Plastic Cup fleet, consisting mainly of veteran teams, cleaned the 60-kilometer section of the river between Tiszabecs and Vásárosnamény-Gergelyiugornya from another 6 tonnes of waste. The organizers highlighted that although regular and heavy floods can rearrange the waste situation in the river floodplain from time to time, fortunately the result of persistent work during the last few years is now visible, the regular cleanups reduced the number of heavily polluted waste deposits in the floodplain. The Plastic Pirates continue cleaning the waste also along the tributaries and lower sections of the Tisza, and at the same time strengthen their international river cleaning programs. The IX. Upper-Tisza Plastic Cup was implemented with the main patronage of President János Áder and with the sponsorship of the Ministry of Innovation and Technology (ITM).

Filmjungle.eu Association prepared a short film about the arrival of the teams at the finish line and the award ceremony:

On the last day of the competition, at least one and a half tonnes of waste was „mined” again by the Plastic Pirates on Jánd Island, which lies in front of the finish line at Vásárosnamény-Gergelyiugornya, which is a secure site for waste piling up among the driftwood year after year. In total 6 tonnes of waste was collected by the 300 participants during one-week at the nineth Upper Tisza competition. Instead of a waste record, the organizers mainly reported on the difficult conditions this year, and the extremities caused by the weather. They stressed that apart from Jánd Island, the largest waste deposits seemed to disappear in the upper section of the river. They added that, based on their most recent experience, increasingly frequent severe floods have the potential to significantly reorganize the waste situation on the riverbank. It is great to see that less waste floats down the section of the river below Vásárosnamény thanks to the Upper Tisza waste removal machine chain.

The organizers continuously carry out waste monitoring, so the Hungarian waste situation is available on the TrashOut international application and on the Hungarian-developed tisztatiszaterkep.hu. The Tisza Expedition of the Plastic Cup joined the competition at Tiszabecs. The expedition departed from the source of the Tisza, Transcarpathia, in the second half of July - thanks to the support of the International Investment Bank. At the end of the race on the Upper Tisza, the expedition continues its journey of discovery all the way to the estuary at the Danube. During the one-and-a-half-month tour, the experts will also get a more accurate picture of the pollution of the Ukrainian, Romanian and Serbian sections of the Tisza. Those interested can follow the expedition adventures online, and in some key locations, the Plastic Cup Plastic Laboratory awaits adults and children with waste recycling programs. 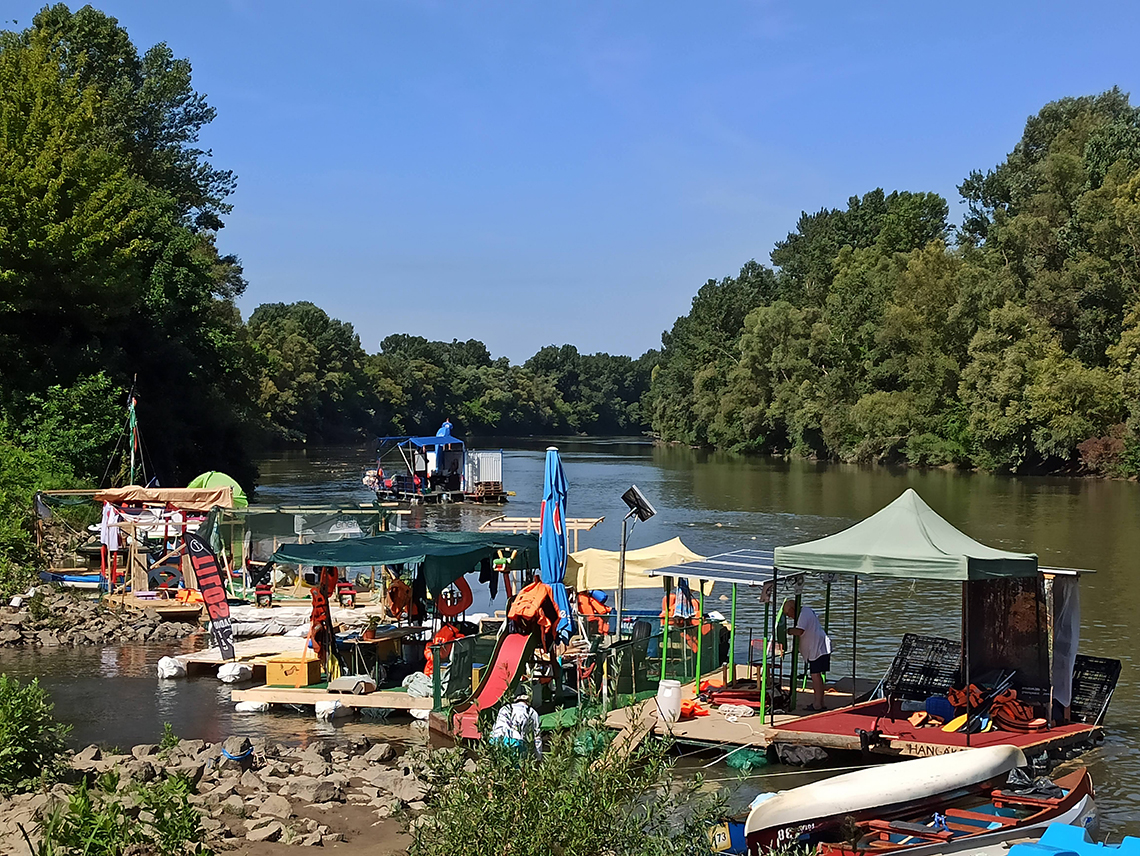 The river was cleaned of 1027 bags of waste

Since the very beginning, the organizers of the Plastic Cup have paid special attention that the recyclable part of the collected waste - after proper selection – would then be recycled. Teams started playing an increasingly important role in the selection work. Most of the waste was already sorted by pirates on shore or aboard on their own ship. Bagged waste worth points called PETák-s, moreover the „Plastic bankers” in charge with scorings awarded four times as many points for so-called „super bags”, which contained color-selected, pressed PET bottles without caps, as for unsorted bags. Kudos to the teams, as more than half of the waste collected was delivered as superbags. 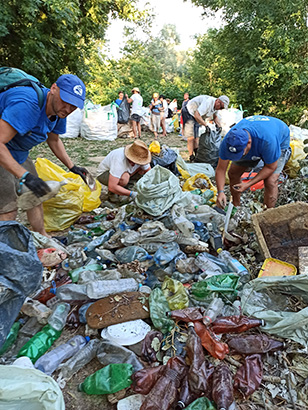 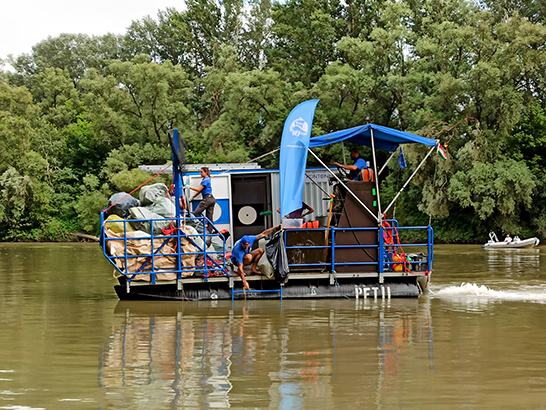 The professional partner of the event, the Hungarian Association of Environmental Enterprises helps keeping the waste in circulation. The selection started by the teams was then continued by the Plastic Cup volunteers. The Észak-Alföld Environmental Management Nkft. helps with sending the recyclable metal and glass waste to waste processors. PET bottles are processed by P.M.R. Ltd. after color sorting and baling. Caps and packaging materials made of polypropylene, such as shampoo bottles, are recycled with the help of Holofon ZRt. and Recyclen Kft. From the secondary raw material obtained this way boat hulls and boards can be made. As we already experienced in previous Tisza races, 60% of the collected waste is being recycled. 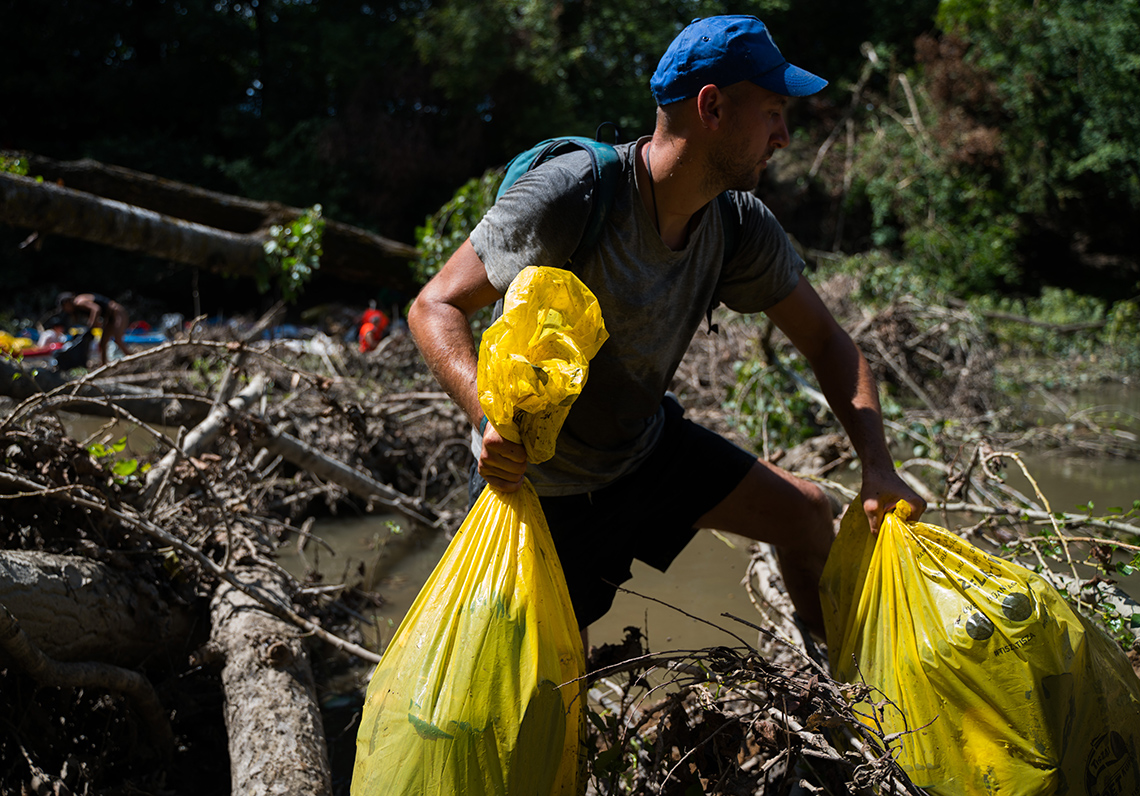 Where everybody is the winner of the environment protection

The many mosquitoes, the dense floodplain vegetation, the changeable water level of the Tisza, the high shores and the storms that arrived in the evenings made the Plastic Pirates work harder. However, most of the teams are returning guests of the Cup, they knew exactly what they signed up for, while the vision of a clean Tisza floated before their eyes. The petak points received for the bagged waste could again be tracked in real time on the Plastic Cup website.

Traditionally, the most petaks were given for garbage collection, but points could also be earned for skill competitions, quizzes, and helping each other’s work. The winner of IX. Upper Tisza Plastic Cup is Siemens Energy team with a great push at the end. In addition to the glory, they were awarded the trophy made of recycled plastic and the gift package of the Zöldbolt online eco-store at the awards ceremony in Gergelyiugornya. Acknowledgement to the team of the second-placed PETrekészek from Nyíregyháza, who although having some local knowledge participated at the event for the first time. At the third place is the veteran team of Hangák, where most generations, children and their grandfathers have been participating in the competition for years.

The work of the smaller but enthusiastic teams has been recognized by the organizers with the Hero of the Tisza Award for many years, the award goes to the team that collects the most waste per person. The cup carved from driftwood on the Tisza fell into the hands of experienced Plastic Pirates again this year: the PETúnia team of adults and children has received the recognition for the fourth time.

The team that provided most help and good deeds during the competition, was the Aztakeservit Értékőr Association, which earned them fair play award. 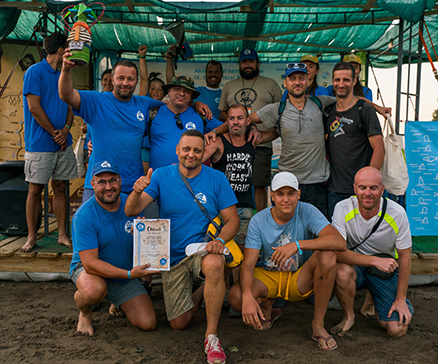 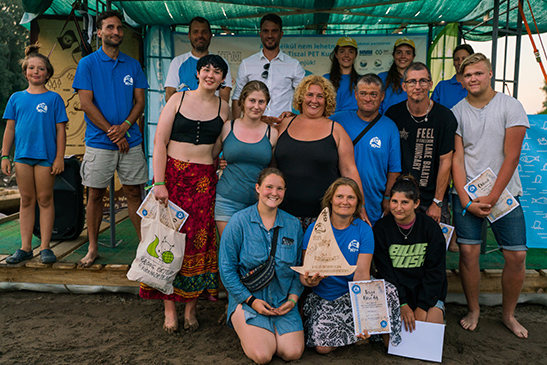 For the first time this year, the three-container floating elements of the Pontoon Convoy have increased the comfort of the participants. The float’s water block with shower, toilet, storage boat and cooking area aimed to cheer up the tired pet pirates. The Pontoon Convoy was implemented with the support of the Blue Planet Climate Protection Foundation. 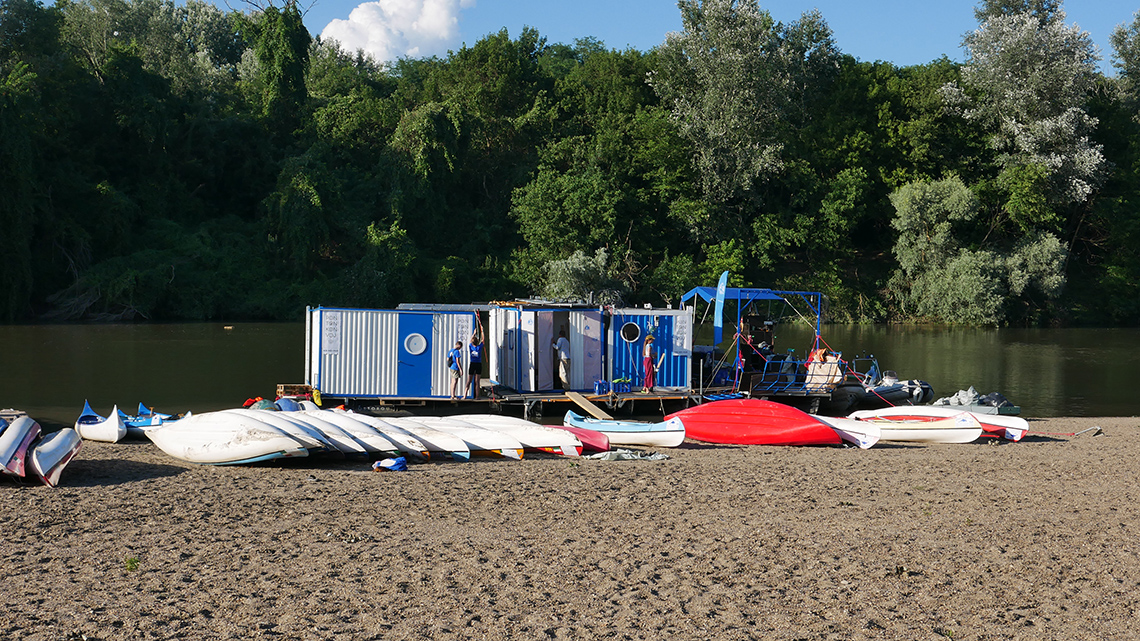 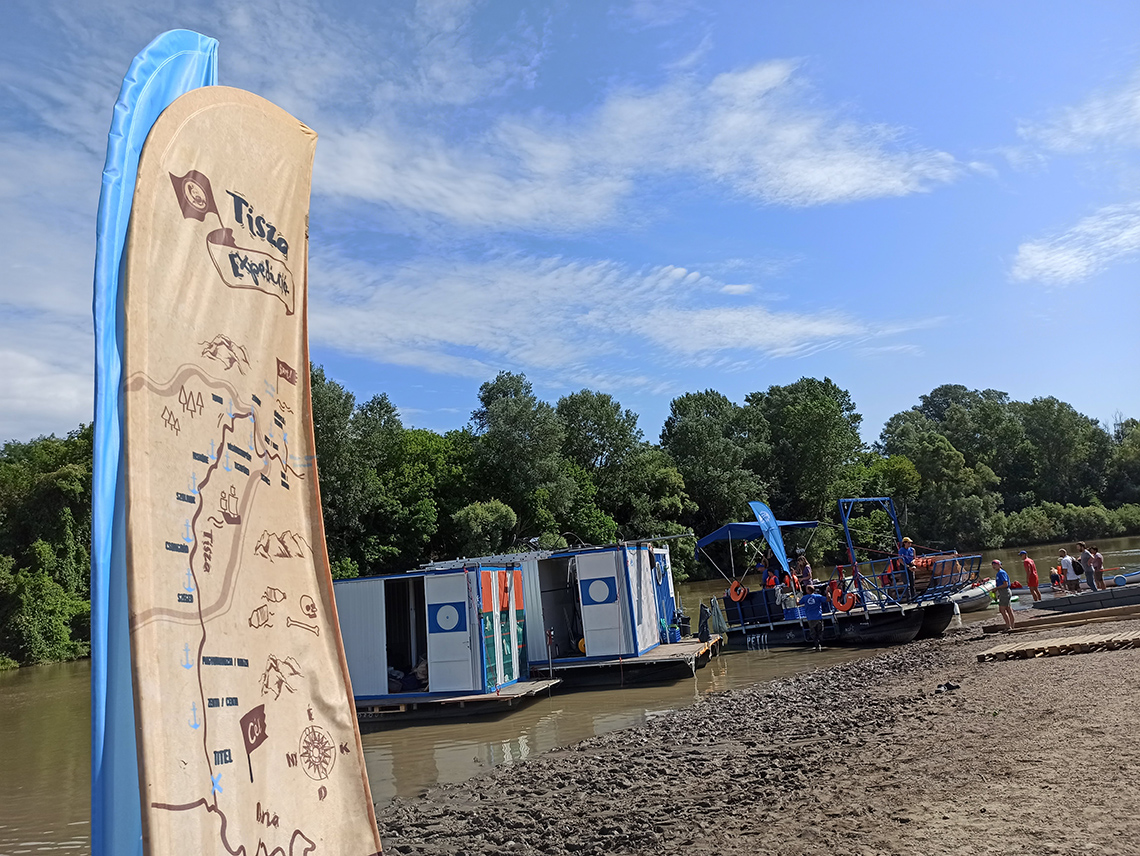 Without whom the IX. Upper Tisza Plastic Cup would not have been possible

The competition was implemented with the main support of the Ministry of Innovation and Technology, under the main patronage of János Áder. The organizers would like to thank the lifeguards of the SONAR Upper Tisza Region Diver and Rescue Association, who took care of the safety of the boaters in particularly difficult conditions this year. Tisza Textil contributed to the construction of the boats with useful raw material. During the race, the motorized service boats were accelerated by HONDA. The PET fleet received a lot of help from the municipalities and enterprises of the settlements along the Tisza, Tiszabecs, Tiszacsécse, Túr-bukó (Tiszakóród), Tivadar, Palkonya, Vásárosnamény-Gergelyiugornya. The new facility raising the participants comfort level, the Pontoon Convoy was made possible with the support of the Blue Planet Climate Protection Foundation, and was built with the help of STORQUE.NET. Special thanks to the Upper Tisza Water Directorate and the Ökologistic Foundation for their cooperation. Henkel, Siemens and Messer Hungarogáz have been partners in river cleaning for many years, and DHL Globál Szállítmányozási Kft. has helped as a logistics partner. Konasoft supported the plastic decontamination of the Tisza with its online competition tracking interface, DECK.hu helped with shipping equipment. Tilos Radio has been spreading the news of the competition with live streams for years. 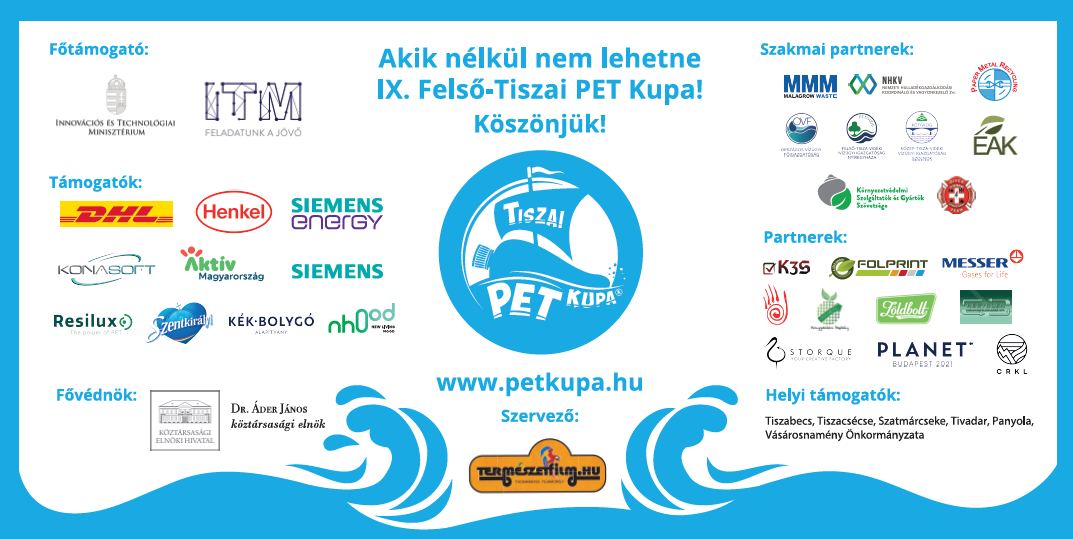 Videos from the IX. Upper-Tisza Plastic cup / Made by: Természetfilm.hu Egyesület

Splash down at Tiszabecs: