Plastic bottle tracking map - Most likely every plastic pirate has bethought of from where, which way and how long the bottle held in her/his hand has arrived. Our recent research within the Zero Waste Tisza river project helps to answer this, on the above map you can follow the journey of three marked bottles. Follow with us the journey of the bottles! Waterscope Ltd. developed the technology within the bottles for the Plastic Cup.

How far can a civil society organization, a multinational company and a governmental institution get if they join forces? 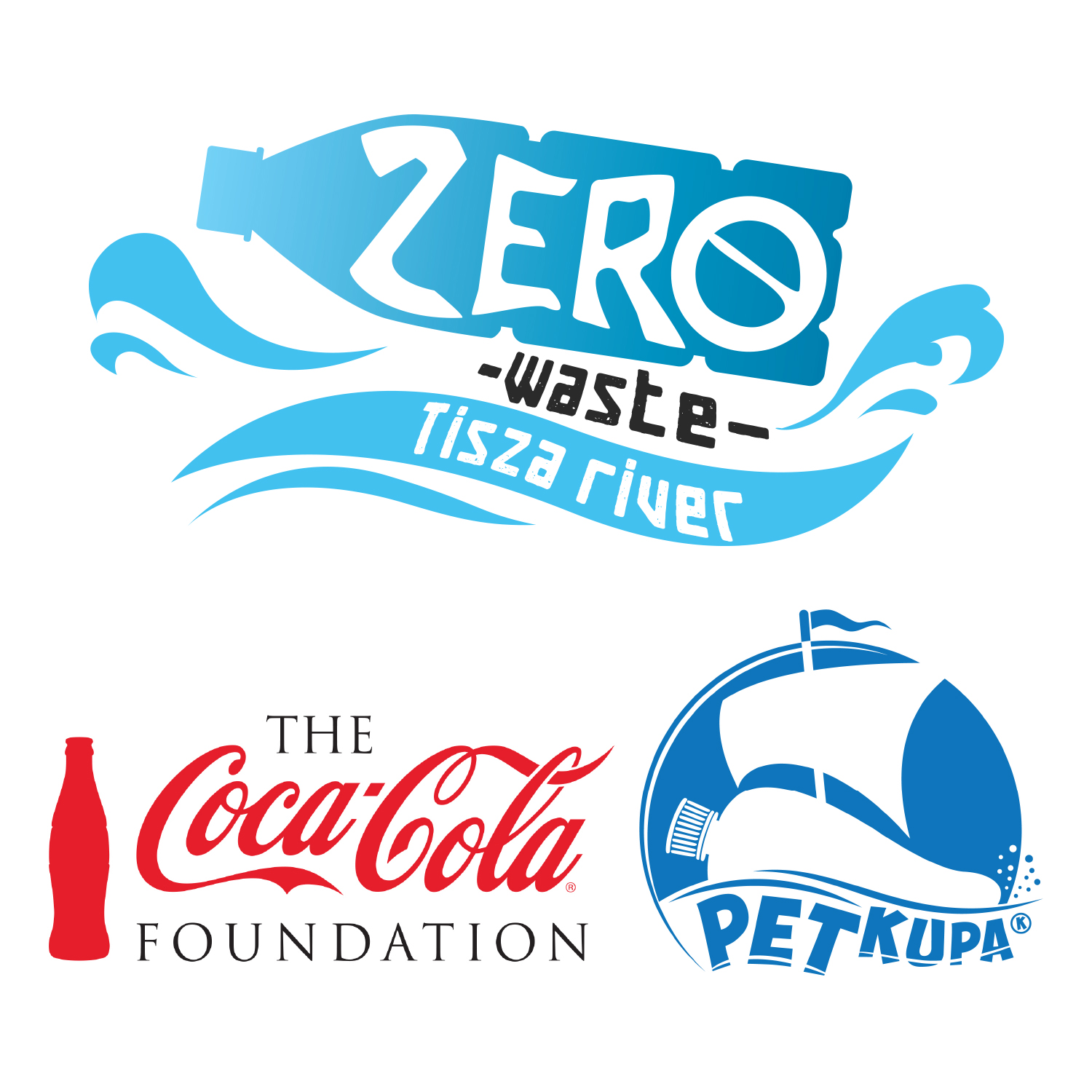 In 2019, Coca-Cola Hungary decided in favour of supporting the efforts at cleaning the Tisza River. For long they had regarded reducing, collecting and recycling packaging materials as a matter of great concern. The Zero Waste Tisza project presented an opportunity to expand their participation and to spread their activities to other areas. The project was funded by the primary international philanthropic arm of the company: the Coca-Cola Foundation.

The Foundation has been operating since 1984 and has returned more than 1 billion dollars to communities all over the world in the meantime. As a result of an open call, the evaluation board decided to grant the proposal by filmjungle.eu Society, organizer of the Plastic Cup. Thus Coca-Cola Hungary is implementing the two-year programme until the summer of 2021 together with filmjungle.eu Society with the financial support of the Foundation in value of 250,000 dollars (73 million forints). The Plastic Cup – aiming at cleaning the Tisza from waste since it was first organized in 2013 – always worked closely with the water authorities of the region. The Plastic Pirates received the most help from the Upper-Tisza Regional Water Directorate, but in the last years many common projects were carried out with the Middle Tisza District Water Directorate and the North-Hungarian Water Directorate, as well. The financial support offered by the Coca Cola Foundation provides opportunity for the Plastic Pirates and the experts of the water authorities to organize those common actions more often and at even more locations. The goal is to free the river of at least 80 tonnes of plastic as part of the project.

Why does a civil society organization join forces with a multinational company?

For the common goal. Consumer society and the big companies serving it play an important role in raising the environmental problems plaguing the Earth. Scientists and researchers of different fields recognized and described the dangers threatening the ecological systems and also the survival of the human race. However, scientific results can only reach the general public if the reports written in technical terms are reworded in an easily understandable form. Filmjungle.eu Society has been working on that since 1996. They explain in their educational documentaries what factors endanger the survival of certain species, the ecological balance of a habitat, and what can be done to solve the problem. It has been proven many times that if the message is clear, many people are able and ready to change their attitude. The world-wide plastic pollution is a good example of that. There are more and more attempts to tackle the situation. Volunteers clean the rivers and seas, CSOs call attention to the problem, and even the UN has created a fund to support this purpose. The consumers’ habits are also changing, although slowly, and there is an increasing number of large companies that attempt to indemnify the environment in which they operate. Considering the extent of plastic pollution, none of the parties believe that they would be able to solve the problem alone. There is a chance to change the situation with cooperation, and the team of Plastic Cup and Coca-Cola Hungary can jointly achieve more.

How much money are we talking about, in how long time will it be spent and on what?

The funding equals to more than 70 million forints at central exchange rate, and it will cover the expanses of three main activities. The first one is collecting plastic waste. Under the coordination of the Tisza Plastic Cup and the General Water Directorate, the regional water directorates will organize large-scale clean-up events within the borders of Hungary at different locations including flood-plains, open water surfaces and tidal forests. Half of the fund will be used for that goal. The second task is research. Volunteers, researchers and water management experts will follow the flow of the plastic flood in the Tisza with GPS transmitters, and map the most severely contaminated areas. The third task is to discover and improve new and innovative ways to upcycle the collected waste in compliance with the “with waste against waste” principle of the Plastic Cup. Those three main activities will be furthered and completed with awareness raising, as part of which exhibitions and professional meetings will be organized, and the production of documentaries, short movies and online videos will continue.

It is nice that they are going to clean a part of the Tisza, but will it not get contaminated again?

2019 is a turning point in the fight against the plastic pollution of the river. Firstly, the waste collecting ship of the Plastic Cup, M.V. PETényi has been working on the open waters since spring. Secondly, the Upper-Tisza Regional Water Directorate will carry out concerted actions to completely close the waterways with locks and thus impede the contamination from reaching the lower sections of the water. Thirdly, the clean-up of the sources of the pollution has also started. Many professional round table talks, consultations and inter-governmental meetings are being organized. As a result, implementation of waste management systems seems to be on the way in the countries at the upper sections of the Tisza, which could put an end to the flow of plastic floods in the future.

How can the results of the project be tracked?

The participating experts and organizations introduced the project to the media and the general public at a press conference in the middle of July, 2019. The location of the event spoke for itself. The building of the water management authorities towered above the Tisza Dam in Kisköre, and from that vantage point the fluvial plastic waste that had accumulated in front of the dam could clearly be seen. Both the volunteers of the Plastic Cup and the experts of water management will be working on eliminating the waste, and the Plastic Pirates will now be able to cover a part of the remediation expenses with the help of the Zero Waste Tisza project, owing to Coca-Cola. Those interested in the next steps of the project can find more information on the social media accounts of the Plastic Cup.

#zerowastetisza Celebrating World Cleanup Day, employees of Coca-Cola Hungary organised a volunteer day again. Shoes, bottles, PET bottles and many other kinds of garbage pollute the River Tisza, its floodplains and reed beds. Volunteers of Coca-Cola Hungary and Plastic Cup collected more than 1.8 tonnes of waste on the Tisza section off the Kisköre Dam, within the framework of Zero Waste Tisza program, on last Friday. This was the second event of the program which was organised as part of World Cleanup Day and surpassed its debut in July when 1,5 tonnes of waste had been removed from the river. The initiative was joined by the Kayak Olympic Champion Ákos Vereckei. The Tisza and the Tisza Lake have astonishing natural assets beloved by many Hungarian and foreign tourists as a holiday resort and fishing spot. However, a large amount of driftwood, organic material and communal waste are washed down here most of them originating from Ukraine and Romania. The Kisköre Dam is the first facility in the Hungarian section of the river which can stop the flood of waste thus protecting the lower sections. This problem needs joint efforts to be tackled effectively. Water management authorities, civilian and industry players – the National Directorate General for Water Management, Plastic Cup and Coca-Cola Hungary – announced jointly in the summer of 2019 that they were prepared to manage the challenge collectively. Plastic Cup has held waste collecting activities on the Upper Tisza for years, which the Coca-Cola joined so that they could help manage the situation with a financial support of HUF 73 million provided by the global foundation of the company and its employees’ volunteer work. Therefore, the program Zero Waste Tisza was launched this summer aimed at providing a constant protection, waste collection and recycling – namely cleaning up the river in an increasing proportion. In the first action in this summer, 70 volunteers of the company collected a total of 1.5 tonnes of waste assisted by Plastic Cup. This time, to join the second activity, almost 100 employees of Coca-Cola Hungary showed up in the vicinity of Kisköre and Dinnyéshát on the 27th of September. By this means, they supported the objectives of the World Cleanup Day which took place on 21st of September. Many of the volunteers got on canoes while others stayed on the dry land and collected litre from the surface of the water, reeds and floodplains, then they sorted out the waste so that suitable pieces of them could be recycled. “With this initiative, we want to disburden nature of a good load of waste and hand them over to circular economy” – one of the volunteers from Coca-Cola said. His colleague added that they encountered with a large amount of waste of very different kinds. “We have found sneakers, slippers, bottles, even a shattered dustbin too. The amount of waste was extremely large”. Enthusiasm were just growing as the number of garbage bags and the cleaned territory in sight was increasing. “It is a very rewarding feeling to see the many hundreds of bags and to feel that me myself had a contribution to it” – another volunteer said. The outcome of the second action surpassed that of the first one: this time 170 bags of waste corresponding to 1.8 tonnes had been removed from the Tisza. Among the waste collected communal waste, glasses, metals and objects made of PET could be found. Most of them had been sorted out based on their type at the spot. The two-time Olympic, six-time world champion Ákos Vereckei also participated in the event. “I saw a film many years ago about Plastic Cup and it won me right away, because it matched both my love of nature and my feeling of comfort when being on the river which I inherited from my past as a sportsman” – he said. The Olympic champion turned to the organisers back then and became the chief patron of Plastic Cup in 2015, only to become a Master of PET in 2018. “Besides my previous commitment now I joined the volunteer day of Zero Waste Tisza project because I would like to make the situation known to as many people as possible and encourage them and my own immediate community to act. It is important to educate the next generation about environmental consciousness. My children, when they joined Plastic Cup, were shocked to realize where it leads us if we remain so careless with littering. Once I heard a very appropriate sentence that I feel especially valid today: Think globally and act locally!” #zerowastetisza, #hulladekmentestisza 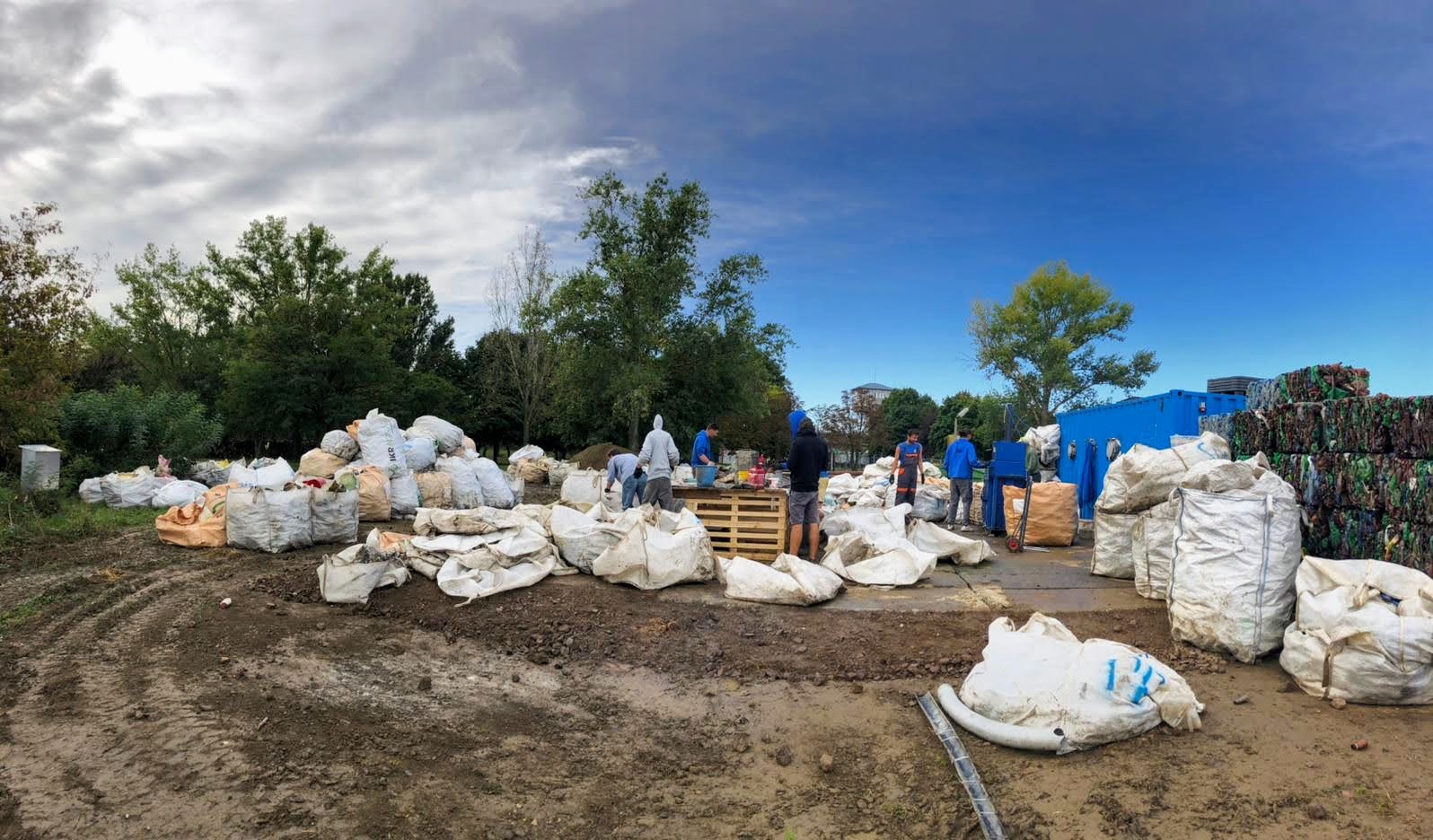 Another huge step towards a cleaner Tisza River

Plastic Cup volunteers found a plastic bottle with a GPS transmitter in front of the Kisköre Hydroelectric Power Plant. The bottle was marked and sent on its way by the Plastic Cup in July 2020, as part of the Zero Waste Tisza River program. 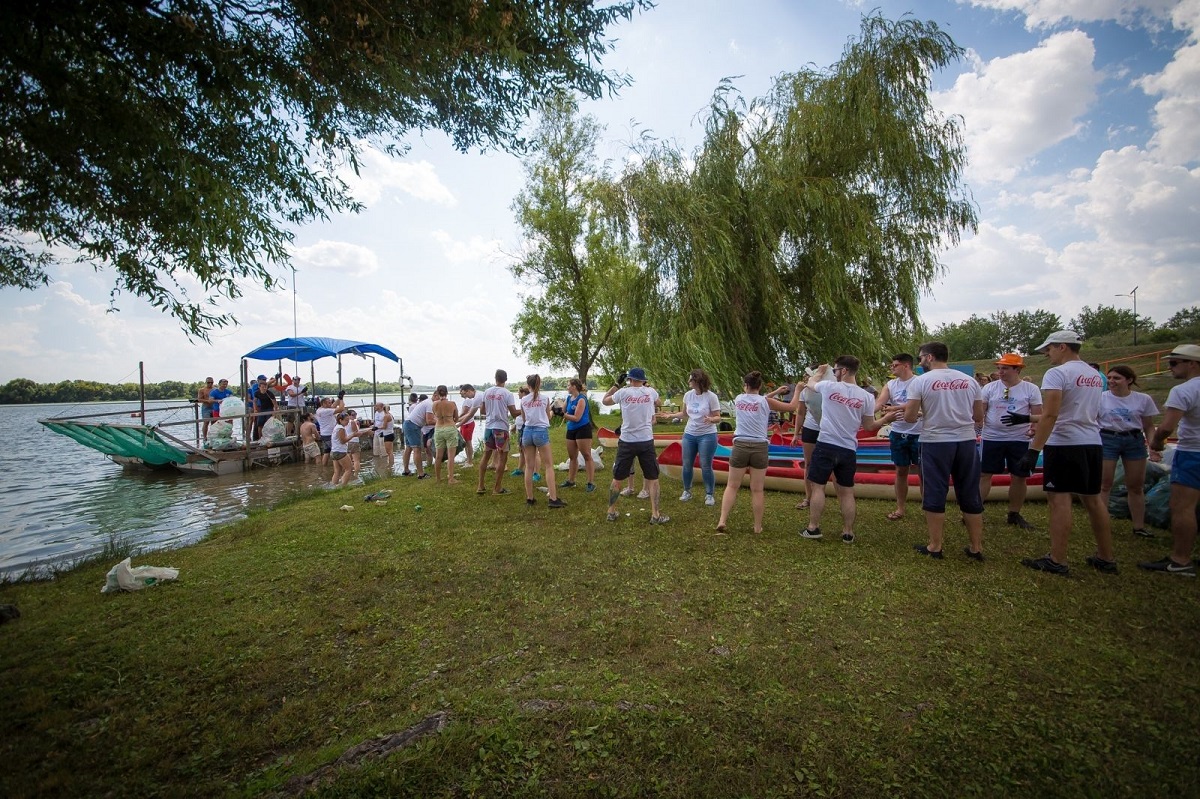 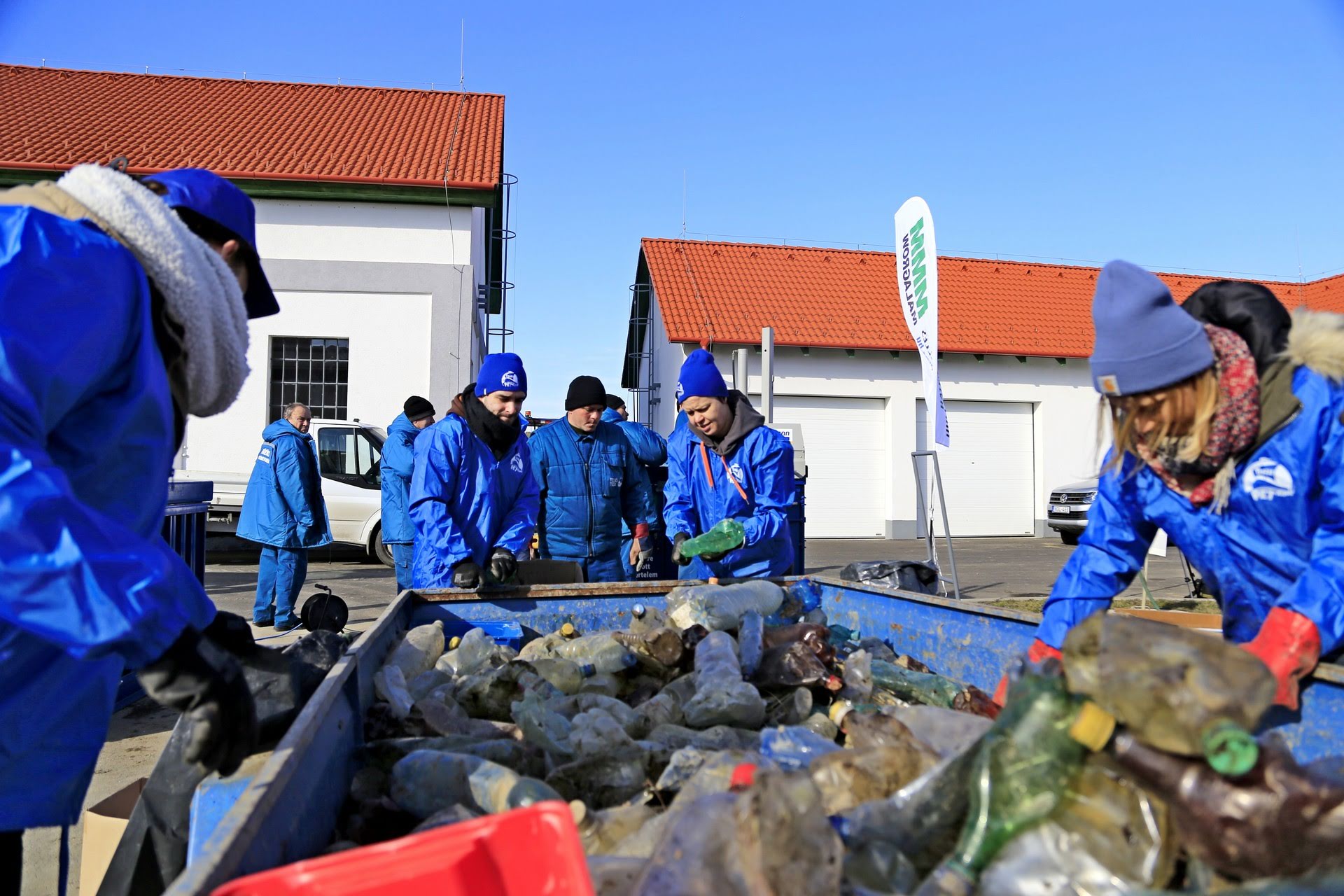 Water experts and professionals of the PET Cup – the latter awarded with the Curator Prize at the latest Highlights of Hungary – intend to clean a Natura 2000 floodplain forest area between 28 February and 1 March. 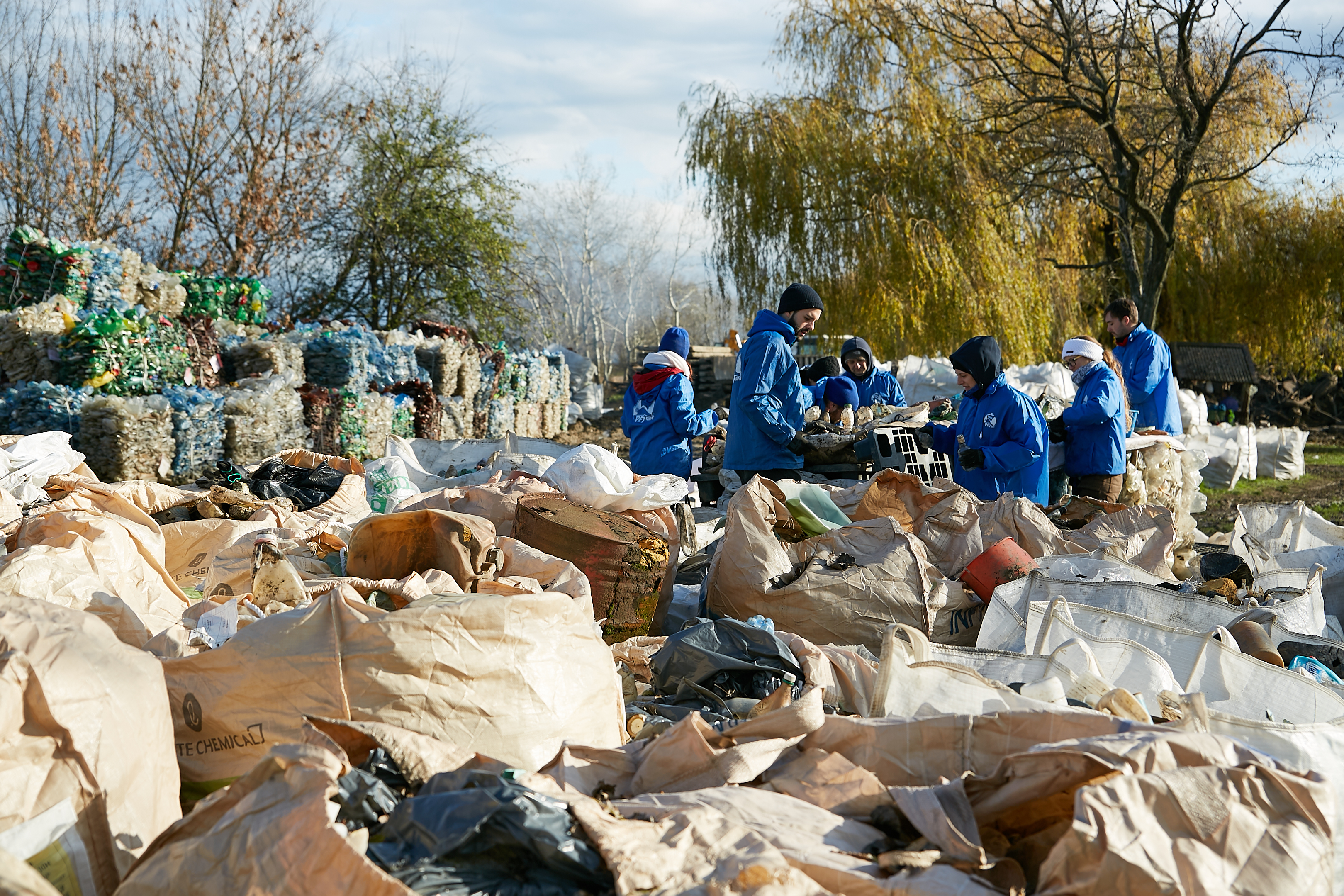 The three-party collaboration announced in mid-July by Plastic Cup, the General Directorate of Water Management and Coca-Cola has been closed with the stopping, removal and recycling of 10 000 tonnes of waste and drift wood collected at the Kisköre Dam. 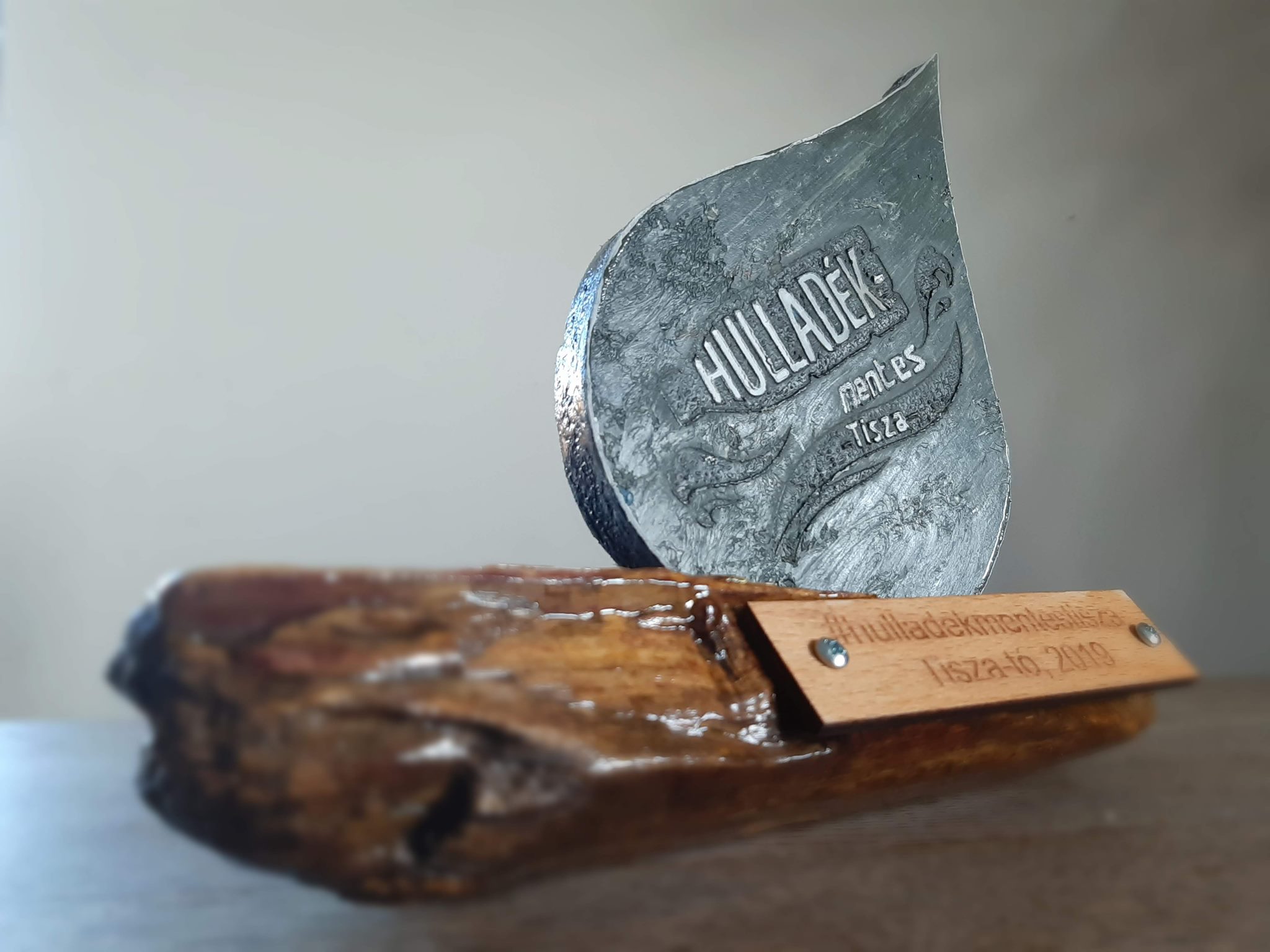 The source of the inspiration, the original award in a Scottish visitor centre. So the award was doing its job – it attracted attention.