Multi-front fight against the winter flood of riverine waste

Despite the harsh weather, the defence is taking place with tremendous efforts, civilians, municipalities, lifeguards, and water management experts are working together in trying to stop another wave of pollution.

In the last days of January, Plastic Cup drew attention to the waste barriers at river Latorca. The North-Hungarian Water Directorate (ÉMVIZIG) and the waste collection vessels of Plastic Cup first took up the fight against the pollution arriving to Hungary on river Bodrog at the beginning of February. The Upper Tisza Region Water Directorate (FETIVIZIG) has responded to the waste flood affecting river Tisza since the beginning of February with a partial river closure, together with the rapid response waste management team of Plastic Cup. Meanwhile, the international negotiations have gained new momentum: professionals have made renewed efforts to eradicate the problem at its source. They would like to help the collaboration of four villages in the source region of the Tisza to prevent waste pollution.

The winter plastic flood first crossed the Hungarian border on river Bodrog. The waste collection vessel of Plastic Cup, named PETII was well prepared for the pollution coming mainly from Ukraine. The rapid response ship unit lifted the floating waste with waste deflection arms and a lifting basket tested in recent years. Sorting of the waste had already begun on board and later continued ashore. 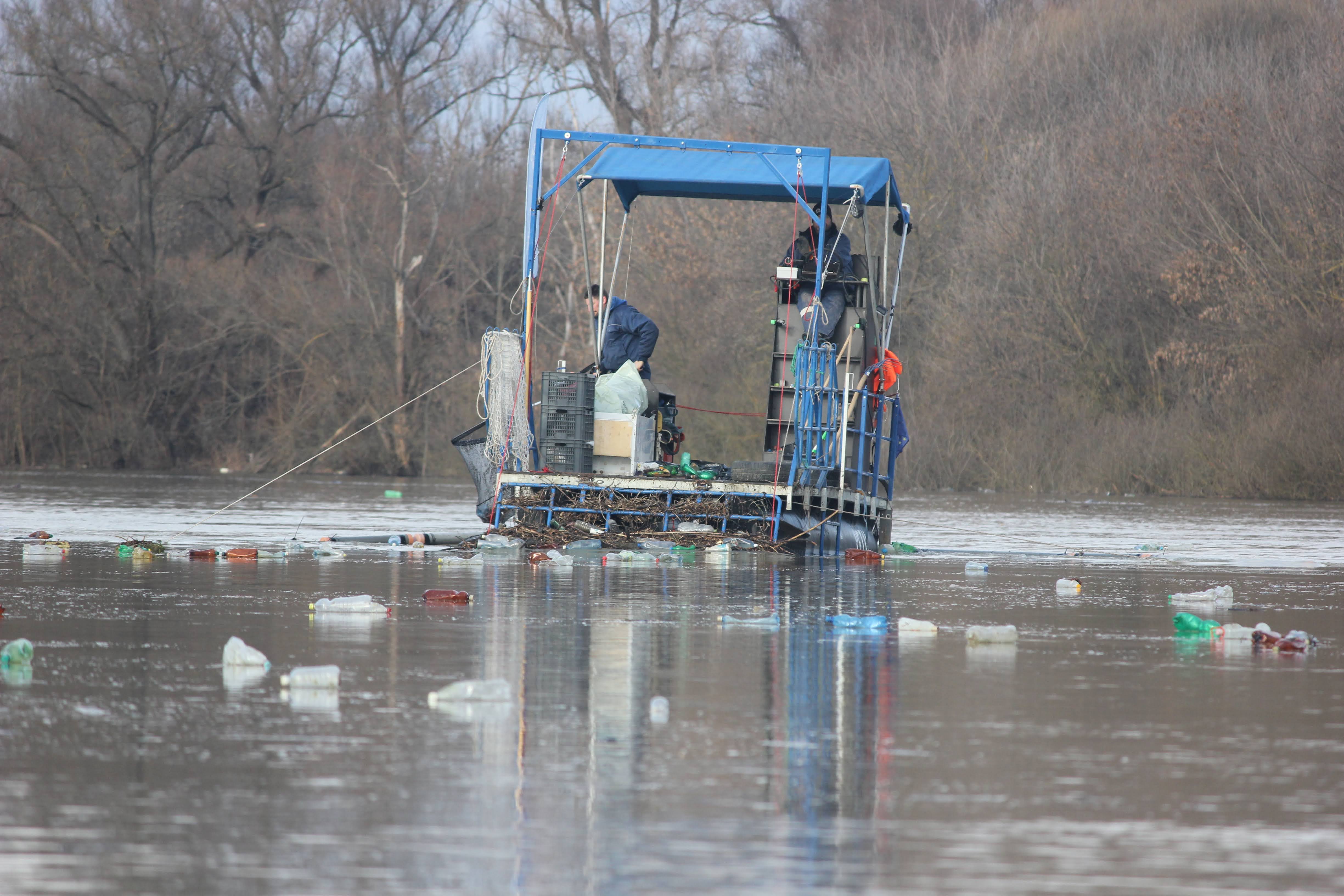 The defence of weeks took place next to Olaszlika with the active support of the local community. The efforts of river savers working next to the experts of EMVIZIG were supported by the municipality, civils, and ferrymen.
Photo: PET Kupa/Ivánfi Csanád

Despite the joint efforts of ÉMVIZIG and Plastic Cup, a significant amount of plastic has been deposited in the floodplains of Bodrog which will start moving again as the flood wave recedes. The Plastic Cup’s rapid response waste management team monitors the movement of waste barriers by bottles with GPS transmitters, and is ready to intervene again if necessary. A few days after the flood of river Bodrog, the first peak also occurred on the Tisza. At Vásárosnamény, FETIVIZIG faced no longer only Ukrainian, but also a considerable amount of Romanian pollution entering Hungarian waters via the river Szamos. 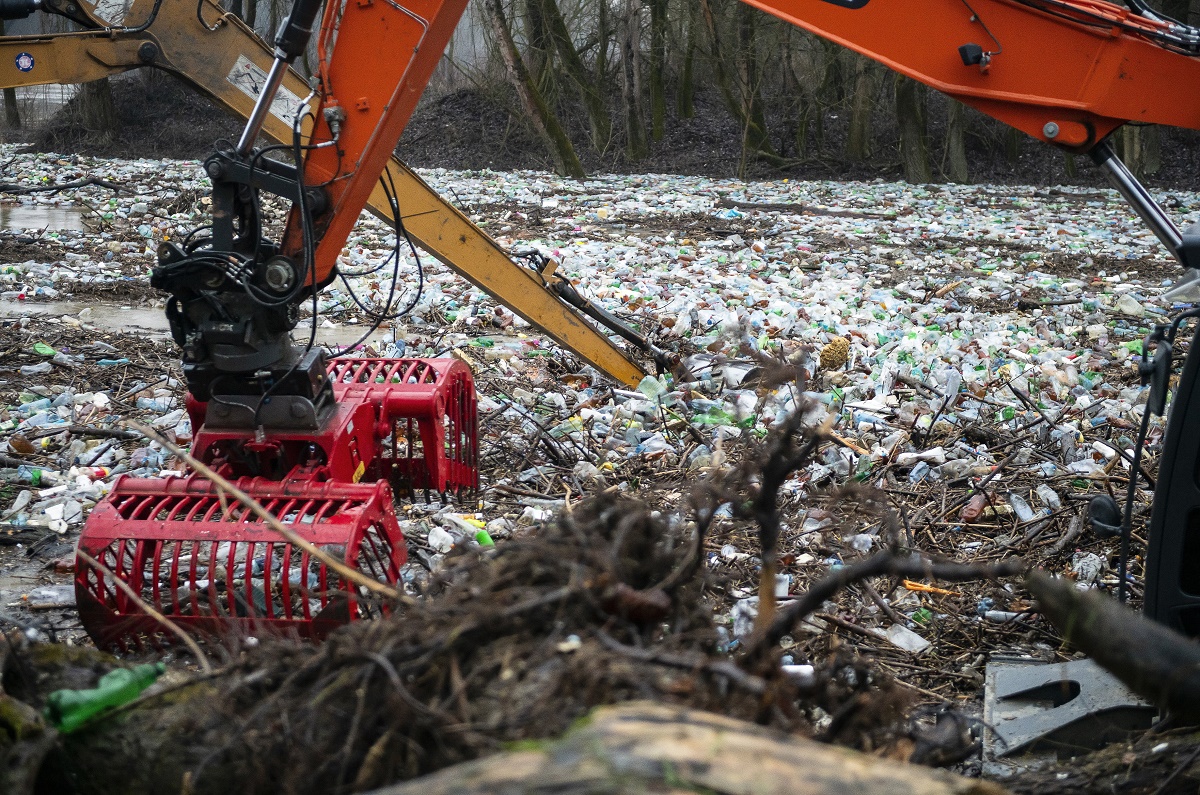 The staff of FETIVIZIG removes the pollution coming with the flood from Ukraine and Romania with a partial river closure in 24 hours of the day.
Photo: MTI/BALÁZS ATTILA

The General Directorate of Water Management (OVF) started the removal of large amounts of waste coming to the upper sections of the river on 5th of February, Friday.

In the Upper Tisza watershed, only 1-4 millimetres of rainfall fell on average in the last 24 hours. However, as a result of the rains of the last few days, floods had started on the rivers, bringing also municipal waste pollution reaching the Upper Tisza,

In its press release, OVF reported that according to camera images and dike-reeves, on Friday morning inorganic waste arrived 1-2 pieces per minute at Raho in Ukraine, 30-40 pieces per minute at the Hungarian border at Tiszabecs, and 60-80 pieces per minute at Csenger in river Szamos. Due to the large amount of municipal waste, the Upper Tisza Region Water Directorate ordered a third-level water quality remediation preparedness at noon on Thursday. The damage control floating machinery was diverted to the Vásárosnamény bridge on Thursday and a partial river closure was set up. The waste removal started on Friday morning with a machine chain developed for this purpose, and the work was going on day and night. This technical infrastructure in Vásárosnamény developed in Hungary is being deployed for the sixth time in real situation under the guidance of water management experts. 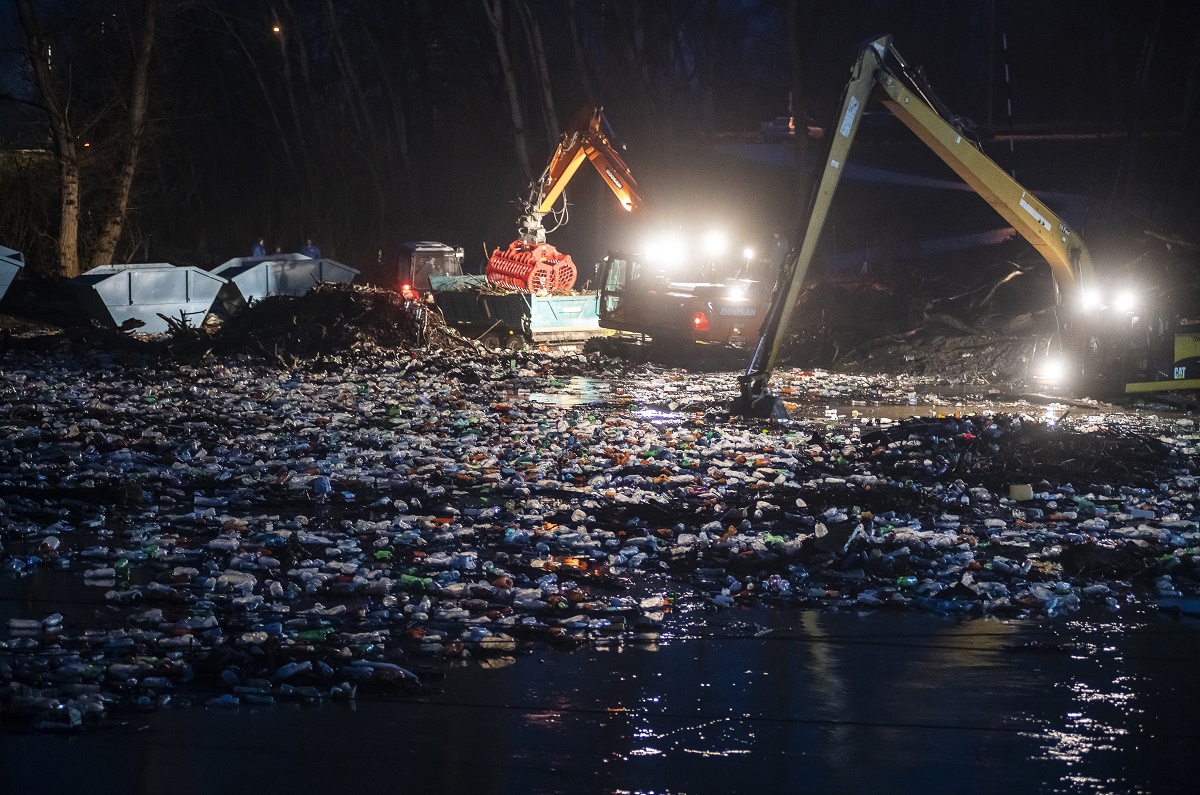 The pre-sorting of the waste started in the remediation area built at the foot of the Vásárosnamény bridge. The waste disposal action group of Plastic Cup, consisting of trained river savers, arrived at the site within hours and began work. According to the cooperation agreement concluded with the OVF, the action group established by the non-governmental organization works with the inorganic fraction of river waste in the designated work areas where it prepares and selects the waste. According to the experiences of Plastic Cup, approximately 60% of the processed waste can be recycled by sorting the waste separately by type of material and also by colour of plastic bottles. Apart of being a good practice and example, it also has a serious cost-reducing role, as only a fraction of the total volume of the floatage is landfilled, most of it is returned to the material cycle, providing secondary raw materials to mainly Hungarian recycling companies. The Plastic Cup team received a lot of help from the Upper Tisza Diving and Rescue Association, who, in addition to setting up mobile workstations, also helped with the sorting. 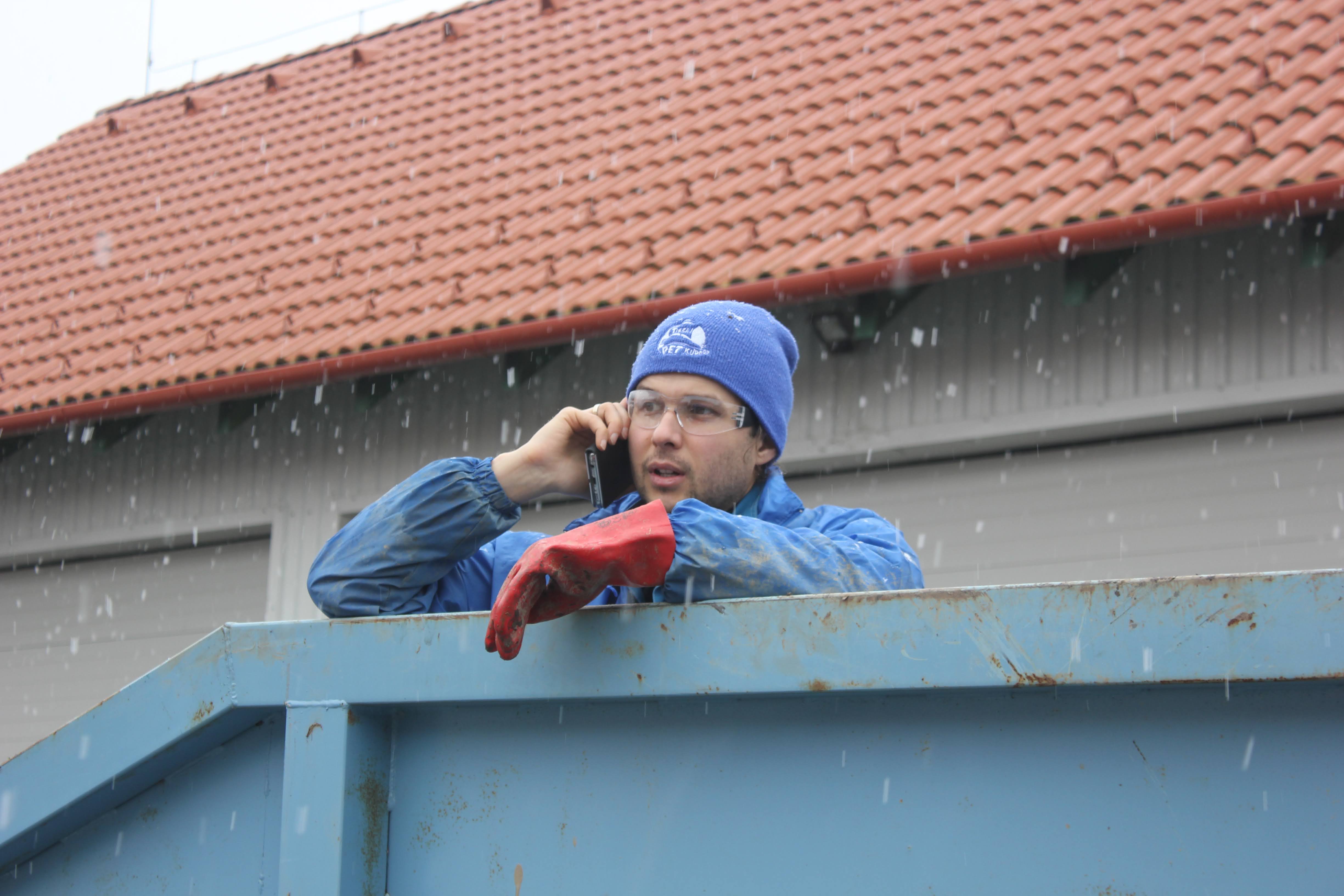 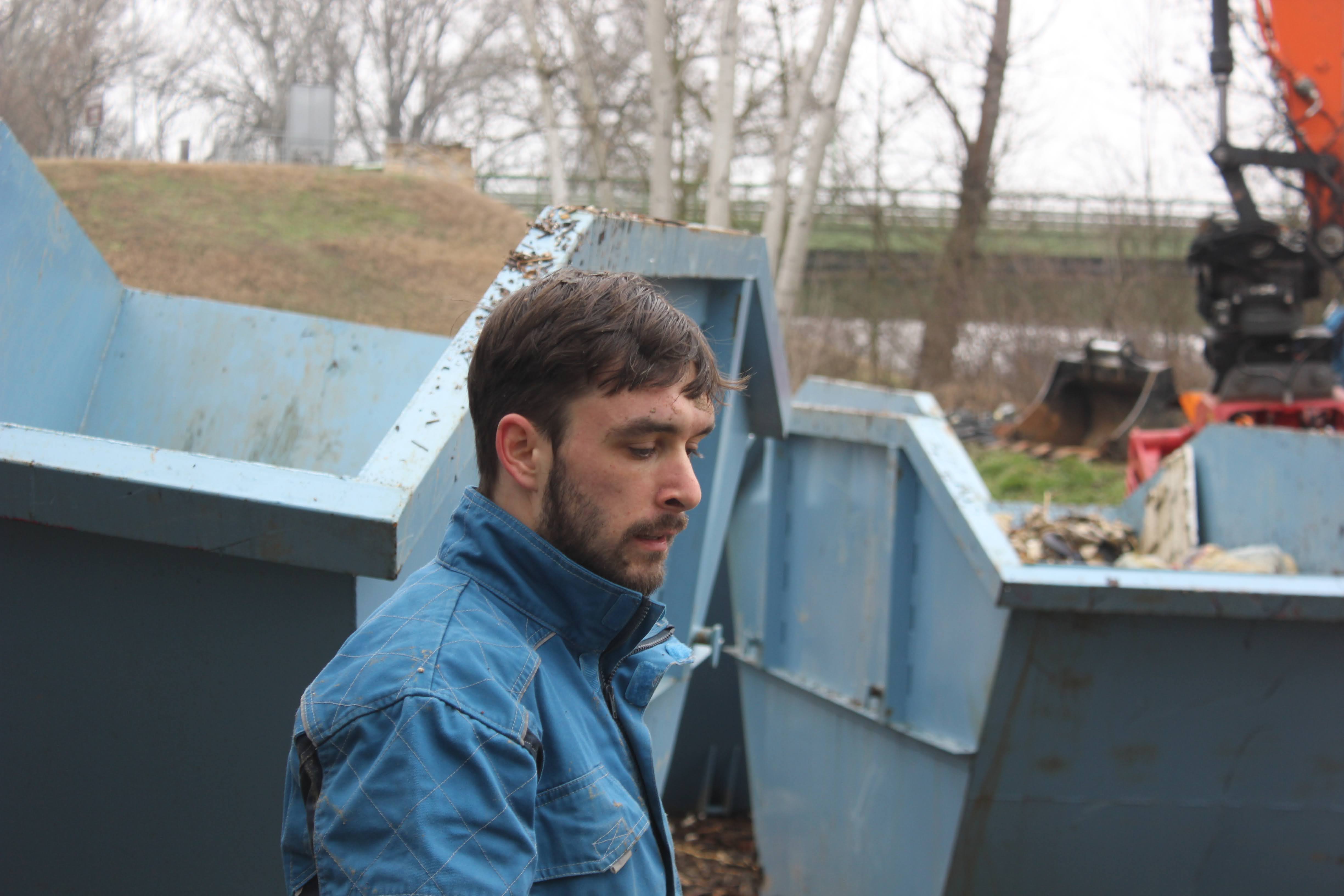 Leaders of the rapid response waste management unit of Plastic Cup (Krisztian Berberovics on the left and Máté Harmat on the right) at the containers storing the riverine waste
Photo: PET Kupa/Ivánfi Csanád

According to the press release of OVF, the water level of the Tisza is expected to remain below the first-stage readiness level, but the water level rise will be several meters in some places. If the water level at Vásárosnamény reaches 6 meters, the machinery will still be able to extract the incoming floatage into the floodplain, but it will only be possible to remove and transport it when the water returns.

The waste flood has meanwhile reached the Middle Tisza. The transportation of sorted and baled waste continues at Kisköre. 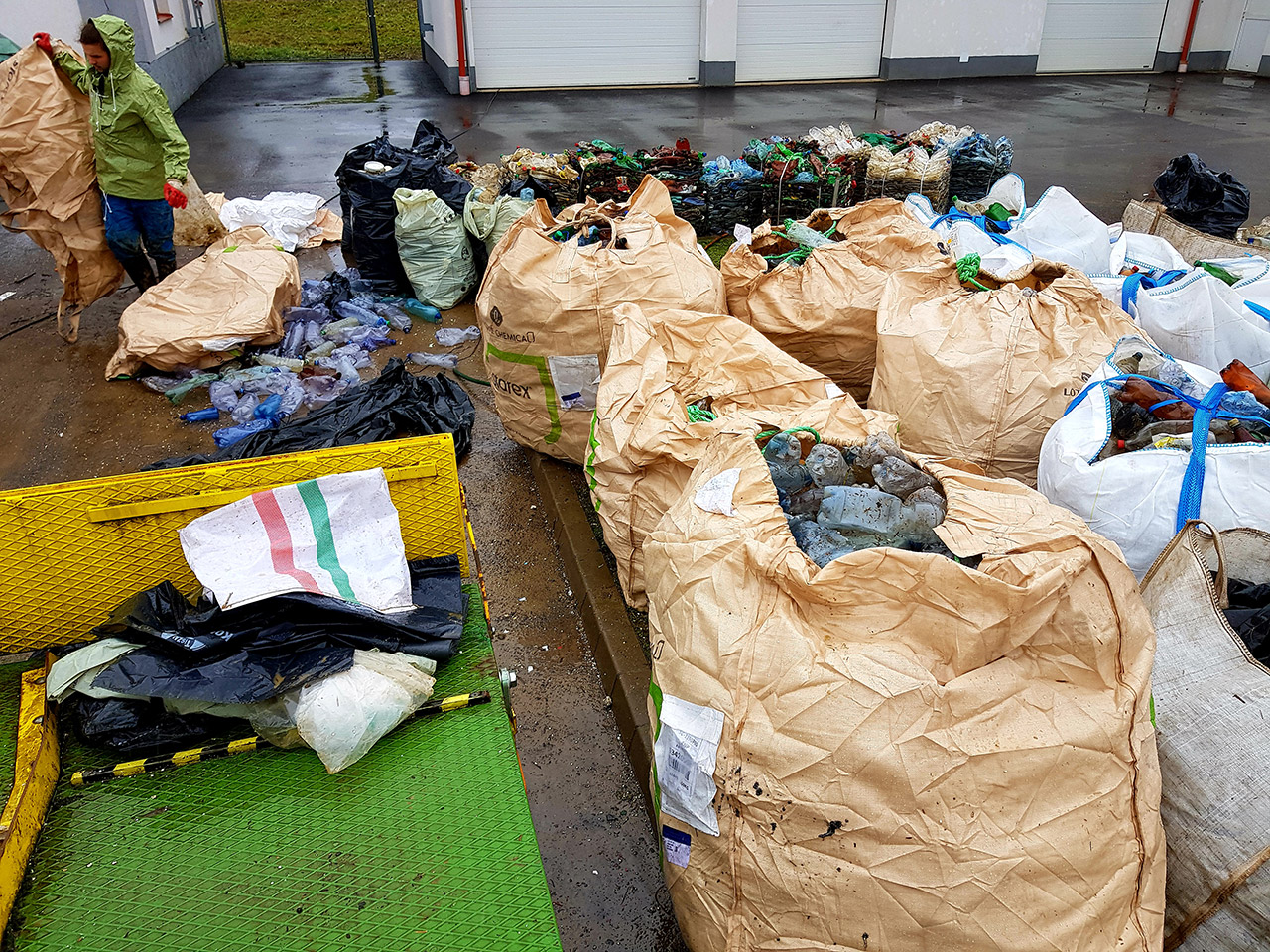 Plastic waste sorted by type and colour. The staff of Plastic Cup performs the sorting on the site of water management at Tiszaszalka. Approximately 60% of the waste sorted here will be recycled.
Photo: PET Kupa

Prevention at the source

At the end of January, due to the pollution in Latorca, Plastic Cup turned to the head of the Transcarpathian Government Office to help eliminate the waste barriers, thereby preventing pollution in Bodrog. Unfortunately, the letter has left unanswered to date.

It is hopeful that Béla Francz from Kőrösmező clears daily 10 cubic meter of waste from the river in the source region, who bought commercial vehicles with the help of Plastic Cup. Természetfilm.hu Association is making a comprehensive documentary about the exemplary project.

The colleagues of Plastic Cup negotiated with the mayor of Kőrösmező on 9th of February, in parallel with the defence on the Tisza. The environmentalists there, in cooperation of four villages, want to prevent waste pollution and set up a waste sorting site at the source of Tisza. In this, they expect the professional help of Plastic Cup and of the non-governmental organization's waste management partner, the Hungarian Association of Environmental Enterprises, also supporting technology transfer necessary for its implementation.

Relevant news of the topic