The PET Cup sailors once again proved this summer that with cooperation, determination, creativity and hard work, it's possible to clear a record amount of waste from the Upper Tisza. The PET fleet of the environmental initiative traversed the river between Szatmárcseke and Tiszamogyorós with boats made of plastic bottles, designed by the participants. During the six days of the race, they collected a record amount of waste, including 45,000 plastic bottles. During this year's event, the participants focused on the professional survey of waste conditions on the Tisza banks and also helped the study of water quality by collecting samples. 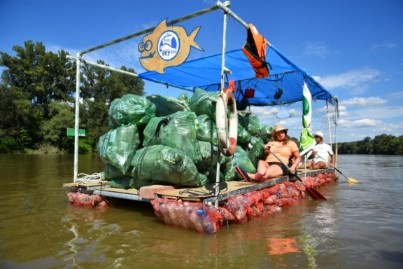 PET Cup's goal is to shine a spotlight on the increasing pollution of the Tisza river as the crews collect as many plastic bottles as possible. The participants help monitor the precise location and size of waste mountains on the banks to create a more complete map, which helps pinpoint critical locations and the types of waste found there. The long-term objective is to launch a cross-border international cooperation to stop the reproduction of the plastic bottle contamination on the Tisza and to clean up the river's tributaries.

PET Cup IV reached its target and set new records. We collected 65 cubic meters of trash, including 45,000 plastic bottles and other waste. We found 62 contaminated locations between Szatmárcseke and Tiszamogyorós, which we recorded with an international mobile phone app, TrashOut, and succeeded in clearing 21 of those, – said Gergely Hankó, the waste management expert on the PET Cup IV organizing team.
We identified sections where hundreds of meters of the floodplain forest are polluted on both banks, – he said.

The chief local organizer of this year's event was Csaba Szabó, chairman of the Upper Tisza Diver and Lifeguard Association.
Since the first PET Cup in 2014, we have provided lifeguard assistance for the boats. It was a great pleasure to participate as partners this years, taking part in the preparation and organization, – he said. – It's a great feeling to leave a cleaner Tisza behind.

Filmjungle Society, which is responsible for the original idea, participated as organizer and film partner; the crew's photos and short videos helped inform the public about the event. Eszak-Alföldi Környezetgazdálkodási Nonprofit Kft. and Térségi Hulladék-Gazdálkodási Nonprofit Kft. helped the activists by transporting and managing the waste. The National Waste Management Directorate contributed as lead sponsor. 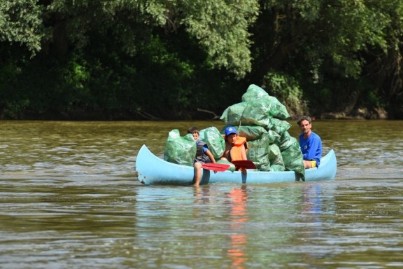 During this year's race, organizers were also keen to discover the type of damage the natural environment suffers from the large amounts of plastic and the related contaminants. Samples were taken from the water and the polluted areas by WESSLING Hungary Environmental, Food Safety, Health and Quality Services Kft. The water samples illuminate the current state of the river, while sediment samples can provide longer-term information as many contaminants cling to mud particles and accumulate in the sediment. While the full examination is yet to be completed, it's already clear that this tremendous amount of plastic does show up in the samples.

The plastic bottles caught in the floodplain forest are just a fraction of the gigantic amount that ends up directly in the Black Sea, where it forms floating islands of trash the size of a major city. The constant friction and the UV radiation then create micro plastic particles that constitute an ever-growing environmental threat, – said Gábor Szunyogh of WESSLING.

The winning boat of this year's race was FesztPet, a joint enterprise of the Gödöllő Nature Film Festival and the Media Council. The runner-up of was Scheci, built by Schneider Electric and third place went to EvezőSÖK, the Siemens volunteer team. The full fleet of the race was: Aztakeservit, Bandisztán, EvezőSÖK, FesztPet, Kutyavacsorája, MeglePETés2, Obi van KENUbi, PAPILIO, PETemplom, Schneci, TISZA2 The lead sponsor of PET Cup IV was the National Waste Management Directorate. 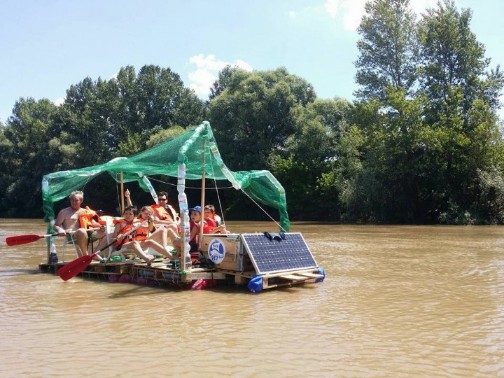