Even though Hungary lags behind the EU average in terms of waste recylcling, at least two bottles of a six pack mineral water still find their way in the selective bins. In Transcarpathian Ukraine, the average is around zero, given the fact that there are no municipal waste collectors, let alone selective collectors. It is a complex problem, there is no ready-made recipe for a solution. Negotiations have begun.

In Uzhhorod, due to the quality of tap water, it is not advisable to drink from the tap, so most people consume bottled mineral water. 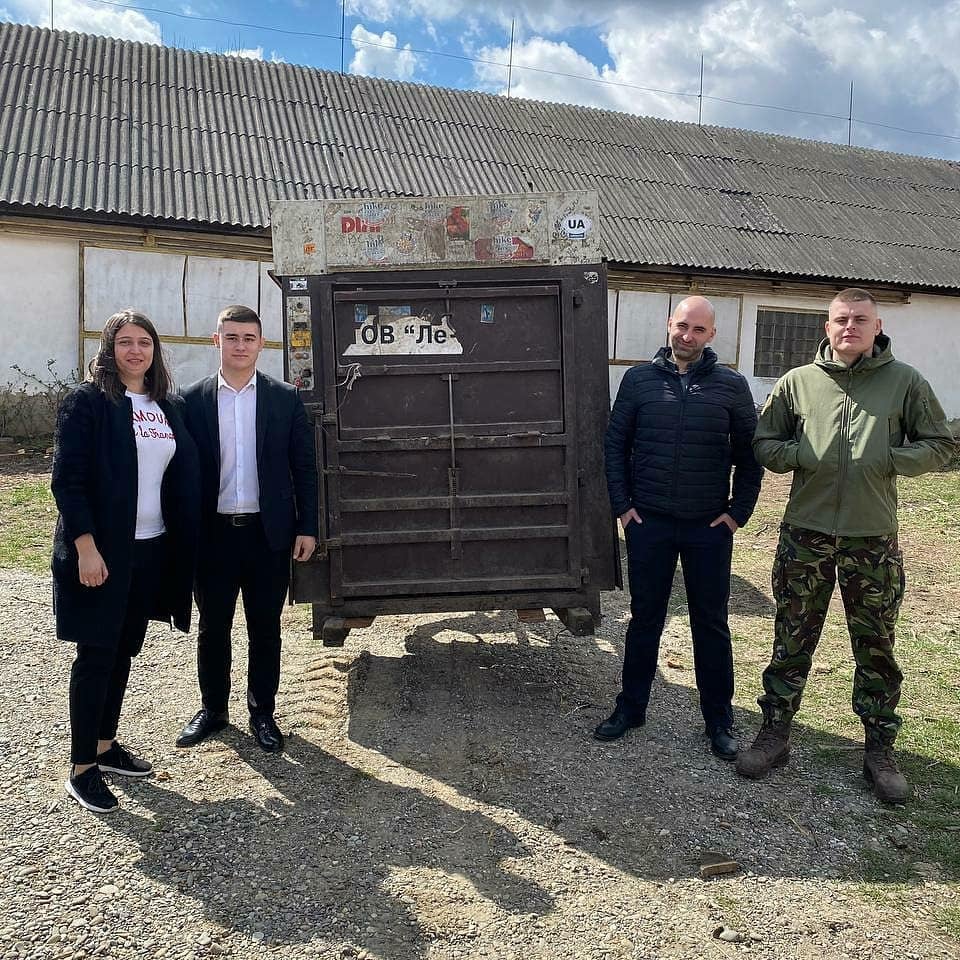 In Vary, Zakarpattia, opposite Tiszakóród, a baling machine already helps with the handling of the recycled packaging materials! The proud initiator is on the right of the baler: Ruslan Shvarts.

Ruslan is trying to operate a waste processing plant in Uzhhorod and has launched waste drop-off points that have been optimized for the newly formed subregions. Thus, in four subregions, this form of selective collection was possible, and the expansion of services is under contract with three other settlements.

The Plastic Cup team have been waiting for these developments for years. Next they will assess the exact needs and the development plans of the waste collectors, providing knowledge and technology from Hungary, since Ruslan faces a lot of difficulties as well. There are no suitable waste collectors, the truck fleet is outdated and unsuitable for the narrow streets of Uzhhorod, and the power supply at the site is bad, causing stuttering. The situation is further aggravated by quarantine, difficult working conditions, and the great challenge of finding a good workforce. Buchynskyy Viktor in Berehove struggles with the same problem.

The goal of the Colored Bins Ecological Movement is to start selective waste recycling in Transcarpathia, but unless we receive support, we will not be able to achieve breakthrough results.

According to the most careful estimations, at least three plastic bottles of a six pack mineral water purchased in Transcarpathia end up in the environment, more precisely on the river bank, from where the floods drift them away. It was Viktor who, in January 2021, drew the attention of the public to a huge river debris dam, consisting of several tons of plastic and driftwood, formed on the Latorica River. On January 26, the Hungarian Association of Environmental Enterprisses (KSZGYSZ) contacted the authorities through an official letter requesting help to prevent pollution. However, the problem - and the debris barrier - proved to be too difficult to handle. There was no reply to the request, and the debris floated on transported by the flood waves, drifting to Slovakia and then via Bodrog River to Hungary. 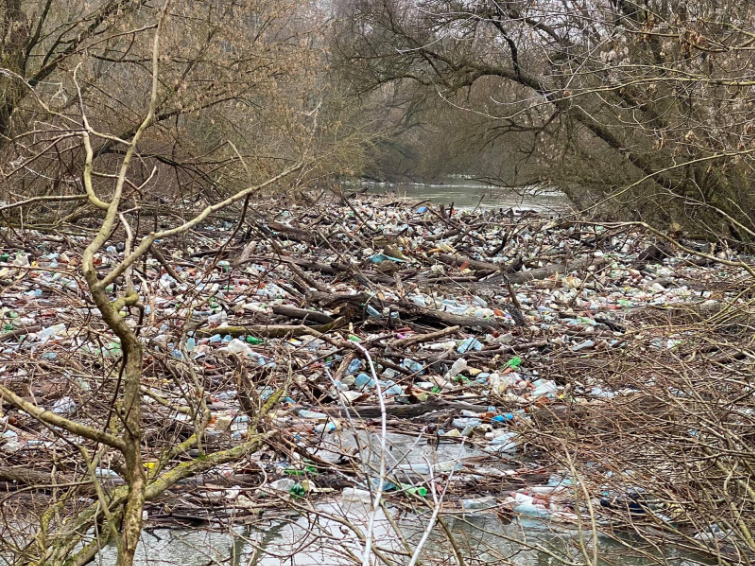 The Hungarian water management experts and the Plastic Cup waste management team tried to prevent the pollution, but the water level and speed made it difficult. Despite all efforts, the waste reached the middle and lower sections of the Tisza.

In 2020, we cleaned hundreds of acres of floodplain forest from waste. Three months later, another wave of litter arrived. The only solution to have a clean Tisza is to deal with the problem at the source.

Right here, at the source, Bela Francz is trying to start efficient waste management. However, the site is small and the 40-year-old UAZ truck used for collecting the waste doesn’t fit the purpose. Unfortunately, the litter that Bela doesn’t collect, it ends up in the river. Apart from this, there is no other waste yard and selection point within a radius of 150-200 kilometers. Bela wasn’t ashamed to ask for help, he traveled to Uzhhorod, where Gergely Hanko and Attila David Molnar organized a film screening on the occasion of the Tisza Wildlife Memorial Day.

We had been looking for cross-border partners for years, we had been through many negotiations when the ice finally broke in Uzhhorod in February 2020. There we met people who were working to solve the problem day by day.

The Hungarian waste management specialist immediately travelled from Uzhhorod to Yasinia. On his way he visited a huge landfill in Rakhiv set up by the river, and then visited Bela's waste recycling plant. Despite the many difficulties, the work was ongoing, but it was clear that the weakest link in the chain was the veteran Soviet-made truck. Realising this, the Plastic Cup team organized a community fundraiser. Thanks to local donors, the necessary money was raised in record time.

Many thanks to the Hungarians for their help in gathering the finacial support in only three days. I can say that the River Rescue Truck does its job, I can collect about 10 cubic feet of waste every working day. I will do my best for a clean Tisza. 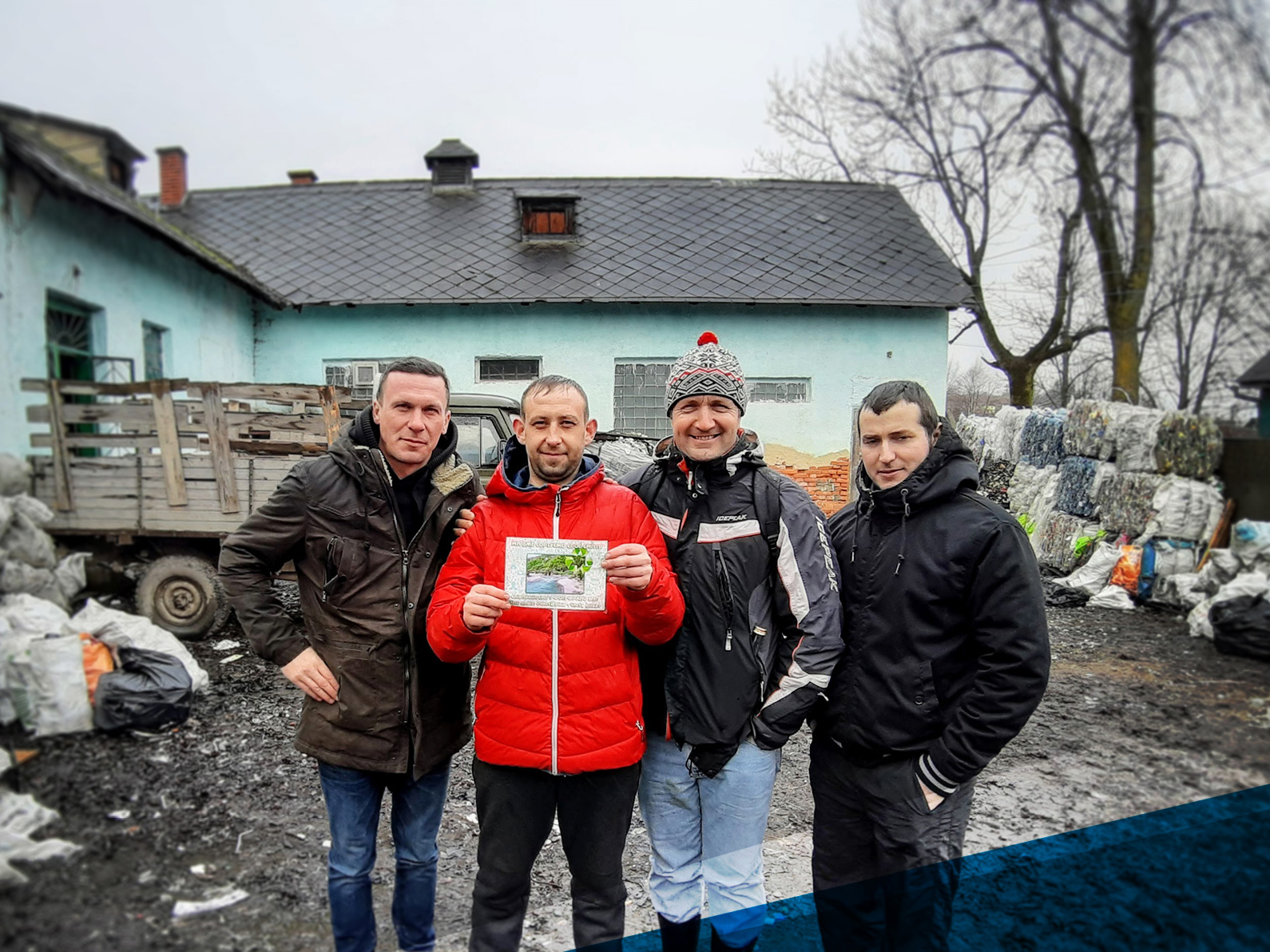 The River Rescue Truck Community fundraising campaign was exemplary, fast and effective in providing assistance. It proved that in good hands, even a little help can lead to great results. However, the strength and time of Ruslan, Viktor and Bela are limited, there are more than 200 settlements in Transcarpathia that neither of them can reach. But, due to the numerous photos and videos depicting river pollution something is changing in Ukraine.

It is reassuring that Ruslan, Viktor and Bela, and even more people who make a point of cleaning the Tisza sat there at the conciliation.

According to Anna Sabadosh, president of the Green Varosh awareness-forming association, the elimination of pollution depends only on the lack of resources and not on the attitude of the Transcarpathian population:

The people are open to pollution prevention methods. If a waste collection and disposal system were available, it would be used.