In February 2020 two members of the Tisza Plastic Cup Movement – waste management professional Gergely Hankó and nature documentary film maker Attila Dávid Molnár – went to Uzhhorod, Ukraine. They have been invited by the US Embassy in Budapest to participate in a commemoration combined with a film screening on the occasion of the Tisza Wildlife Memorial Day to commemorate the 20 th anniversary of the 2000 Baia Mare cyanide spill catastrophe. Similar events were organized more or less at the same time in Romania, Serbia, Hungary and Slovakia, that is to say in all the countries of the whole drainage basin of Tisza. 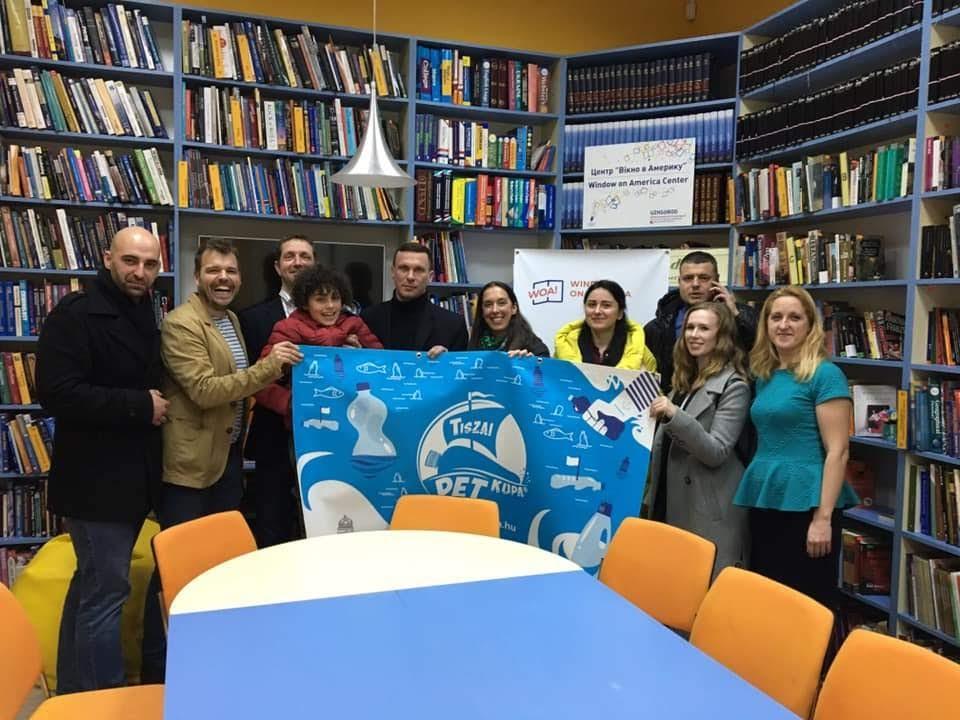 5 countries participated in the screening. Leftmost stands Ruszlán Schwartz, in the middle Viktor Bucsinszki and Gina El Kassem, the initiator of the event, next to her is Irina Shchoka.

The idea of the screening had occurred to Gina El Kassem after she personally had participated at the 7th Tisza Plastic Cup. The screening of the multiply awarded documentary 'Message in the Bottle' had a full house, and was followed with a vivid and inspiring conversation. It emerged that previously many of the participants had known nothing about the cyanide spill; they congratulated Plastic Pirates on their great work of building plastic-bottle ships and removing big volumes of waste. But Gergely Hankó said that the work wouldn't have its real effect until the causes of pollution could be eliminated, and that's why the personal presence of Ruszlán Schwartz, Béla Francz and Viktor Bucsinszki was of big importance: they are all working to bring about the selective collection and recycling of the communal waste produced by their respective settlements (Uzhhorod, Berehove, Yasinia). 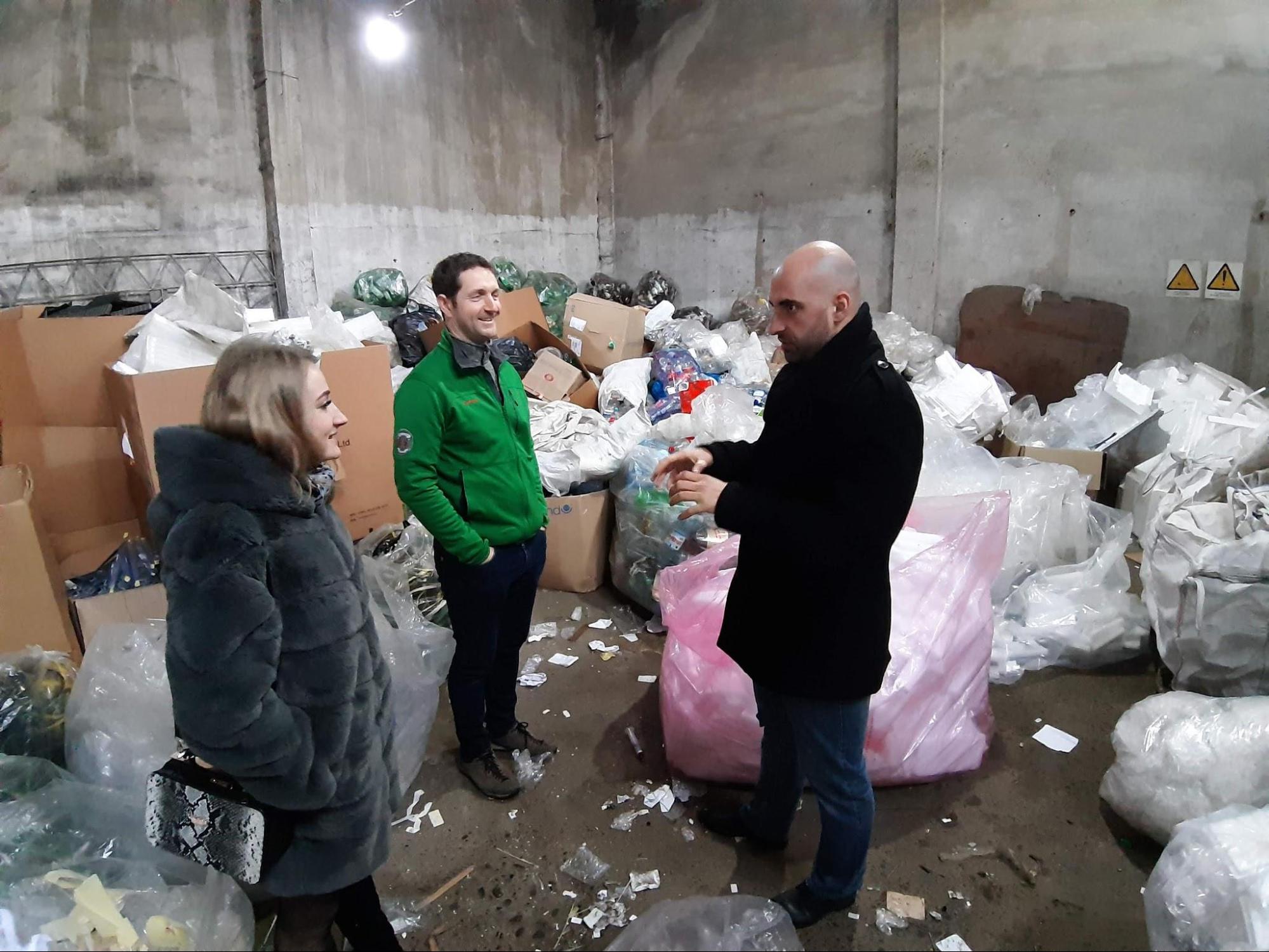 Ruszlán is explaining the functioning of the garbage dump to Gergely Hankó waste management professional, PM of the Plastic Cup and CEO of KSZGYSZ.

Ruszlán runs a professional garbage dump in Uzhhorod, while Viktor launched his Colourful Tanks program in Berehove, and Béla collects and selects garbage in the High Carpathians, at Yasinia. All of them face similar hardships. The officially set prices for selected garbage are low; enterprises get no subsidies; rents and appurtenances are high; the general population's trust towards the garbage managing enterprises, corporate social commitment and the infrastructure are both insufficient. To Attila Dávid Molnár's question concerning their biggest need the answer was almost unequivocal: a reliable pick-up truck would be a must. If the 30-40 year old trucks didn't have regular technical failures, it would still be impossible to use all the bad and narrow roads where the most garbage stocks up. And if the truck lags or lacks, the garbage produced at villages sooner or later gets into the mountain streams, and finally into Tisza River. 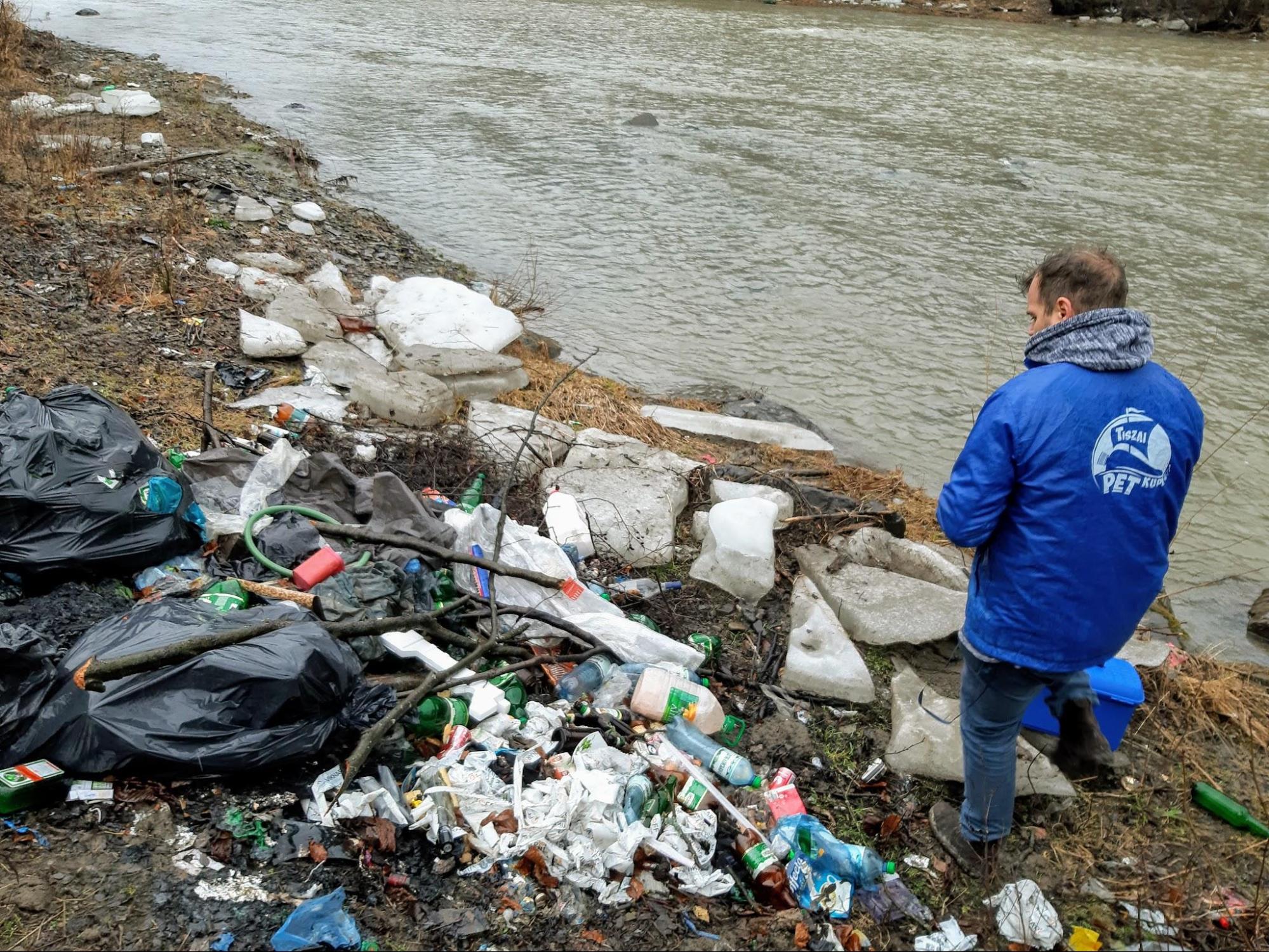 Illegal garbage dumps here and there and everywhere

Professionals could themselves gauge the scale of the problem during the field tour for PET Pirates guided by Zoltán Németh, the vice-president of KMKSZ ISZ. He has been guiding tourists in the region for years now, and knows it like the back of his hand. 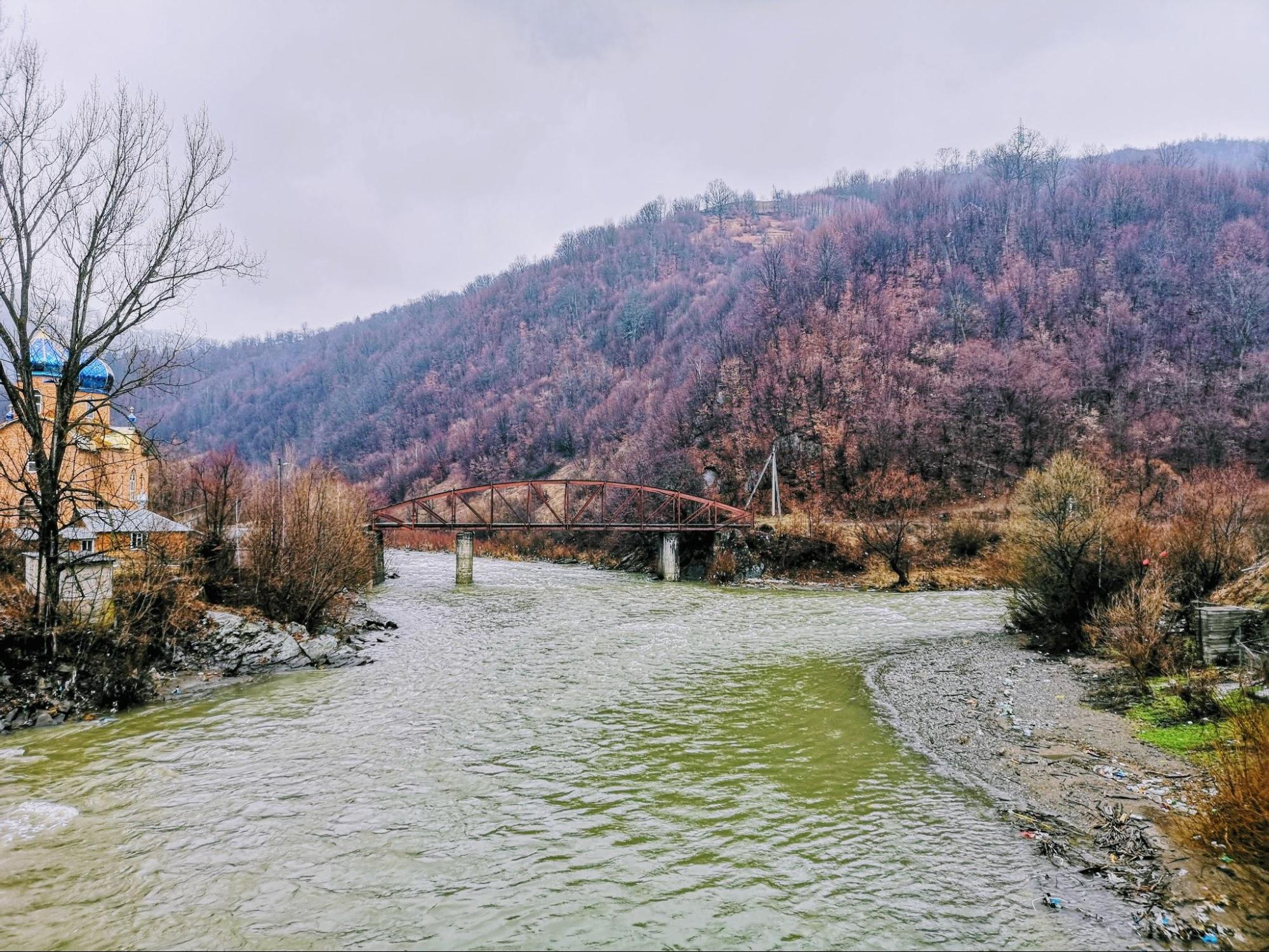 The land is of immense beauty: snowy ridges, pine forests, waterfalls. 'It's just all this garbage, that doesn't quite fit in the picture. Look at the contrast, what is all this garbage doing in a beautiful alpine landscape like this?' One of the biggest close riverside dumps of the region is located next to Rakhiv. Just during our supervision three trucks arrived to the pile, and deposited their loads, which was partly burning and exhaling blueish smoke. The garbage pile is over 10 meters high, and welts the water through several hundred meters. The lesser estuaries of the river are also severely polluted; endless tufts of plastic bags "decorate" branches of waterside trees. 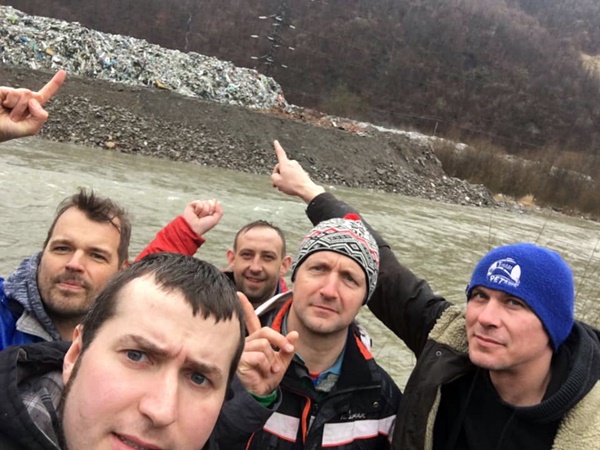 At one of the biggest riverside dumps, next to Rakhiv. Form left to right: Attila Dávid Molnár, Zoltán Horváth, Béla Francz, Gergely Hankó, and Viktor Bucsinszki in the knit Plastic Cup cap.

The PET Pirates collected data, taking photos and shooting videos, then went along the Black Tisza by car up to Yasinia. Plenty of foreign registration plates can be seen there; Bulgarian, Polish, Latvian, Lithuanian, Moldavian tourists come here for trekking and skiing, but their waste ends up in the river, too. Béla Francz fights the garbage torrent like some lone folk-tale hero. In drizzling rain he showed us his garbage court. Despite the harsh conditions exemplary waste management and selection is performed here, but had he better conditions, he could do away with much more garbage. A better location for the court would be nice, and also a better truck in addition to the old UAZ – but his strong dedication is the deciding thing. 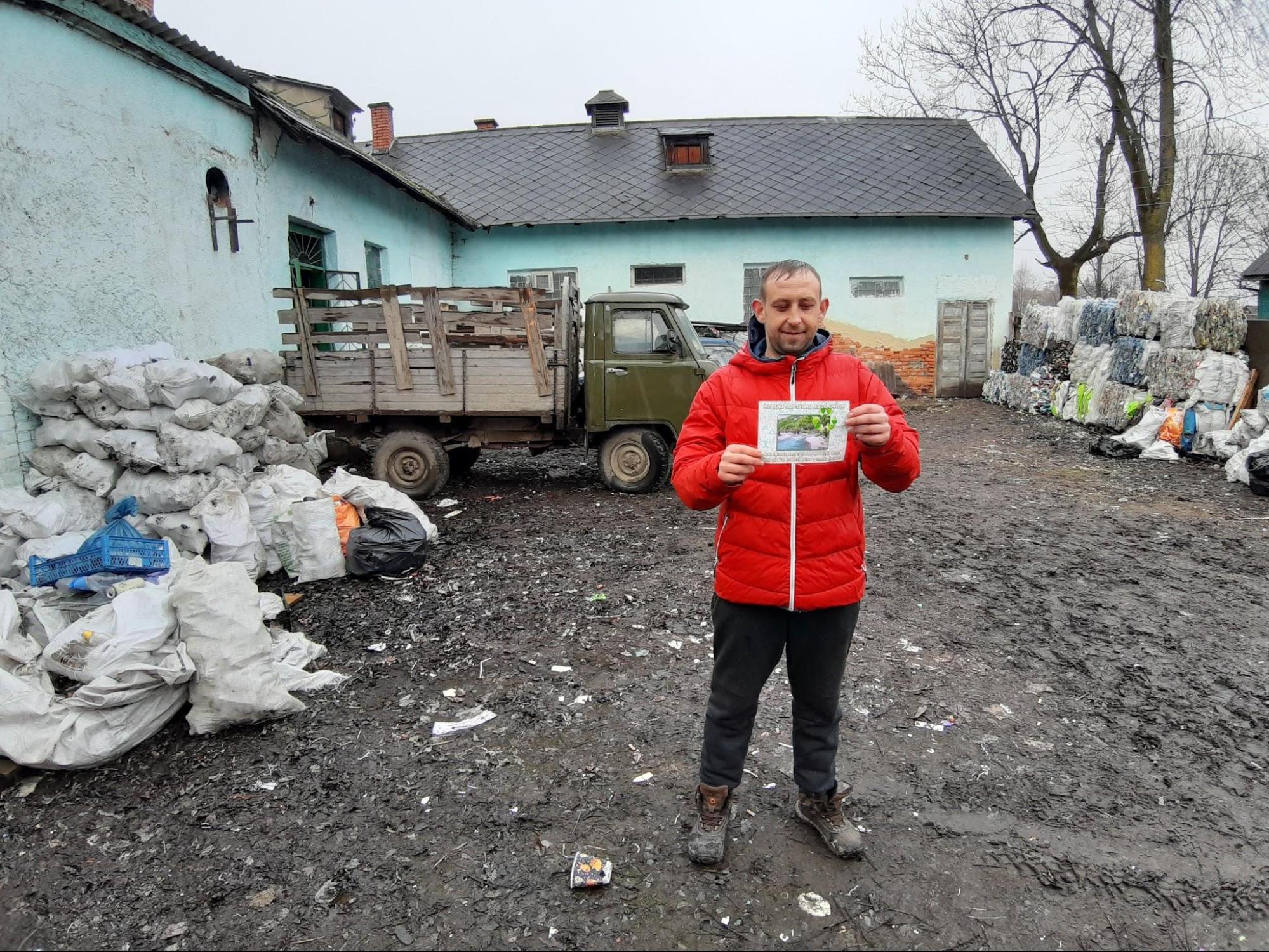 After the field trip Béla's mother laid out a feast for the Plastic Pirates. There was brindza – white sheep's cheese –, blueberry preserve, forest mushrooms, smoked bacon, sausages and dense Hutsul soup, with freshly home-baked, crispy bread to go with it. It was a completely zero-waste gastro experience, as all the goods came from the market garden or from surrounding forests. "We crossed a border" – as Gergely Hankó set it out travelling home – "in all senses." He's been seeing the future quite optimistically since our visit at Hungarian consulate; after so much talk now there are chances to really step forward, since every plastic bottle collected at the headwaters of the Tisza is a substantial help for us and the whole drainage basin of the Tisza and Danube rivers. As Attila Dávid Molnár added then, "Really, until now we just have been looking for upstream contacts, but now it seems that we have found them finally." After crossing the border, as soon as we succeeded in connecting to the Hungarian mobile network, we immediately received the message that the garbage lock at Vásárosnamény has been set up and functioning.

From the Rákóczi bridge at Vásárosnamény we could see the work lights glaring; despite the dark, windy, cold weather, the appliance line attached to the partial barge-held riverbed lock was running at full capacity. Water management workers were doing their umpteenth shift on board, then in one of the scarce breaks the PET Pirates managed to shortly talk to segment engineer Gábor Molnár of the FETVIZIG. He told us that 200 cubic meters of garbage had been harvested from the first flood wave, but the end of the intervention is still far ahead. The garbage removing system was launched a year ago, and since then it has been defending the lower waters as a stronghold.

P.S.: Podcasts made during the tour could be found at PET Pirate Radio: